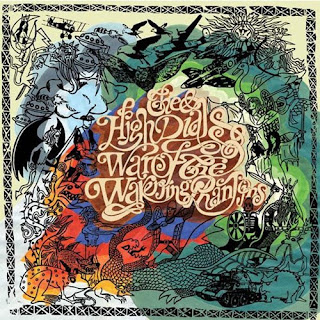 On their second album, War of the Wakening Phantoms, Montreal's High Dials cast off the '60s straightjacket that gave their first album the feel of a museum piece or a school assignment. Instead they follow the initial steps made on the follow-up EP, Fields in Glass, and open up their sound to include more modern reference points like the Stone Roses, the '90s shoegaze sound, and, somewhat inevitably, new wave. The extra layers of influences free the High Dials from the past, and they magically end up sounding like no one but themselves for the most part. Sure, you can still spot references at times, but they are less obvious -- a little Kitchens of Distinction here (in the hazy walls of guitars on "Strandhill Sands"), a dab of Moose there (the shoegaze & western slide guitar on "Master of the Clouds," the plucked acoustic guitar on "Lucifer's Dream"), and some classic Ride all around ("Sick with the Old Fire," "Higher and Brighter"). Best of all, there is almost no Who to be found anywhere, but there are soaring vocal harmonies, waves of guitars, and gloriously free and easy-sounding songs -- like "Our Time Is Coming Soon," "A River Haunting" (which features some wonderfully corny-sounding synth washes), the epic ballad "Your Eyes Are a Door," and "The Holy Ground," a pounding rocker that opens the album with a biff bang pow! -- that overflow with a joyous energy that's surprising on first listen and heart-warming on the next 20. It is always fun when bands reinvent themselves, mostly because they usually botch the job and become laughingstocks, but the High Dials do the nearly impossible and make the makeover work for them in the most delightful way. War of the Wakening Phantoms is the sound of a band discovering its soul and creating something beautiful and big -- really big in a way that bands like Moose and the Catherine Wheel never quite were back in the day. If you thought the first record was nothing special, come back and give the band another chance, because this album will blow you away. If this is your intro to the band, welcome to a surprisingly great album. -AMG

Hey Ken! Links have been updated

Thank you very much!
And may I add: you have a terrific musical taste...
Keep up the good (blog)work!

Hi, I've just been introduced to the High Dials and as luck would have it I've been able to D/L two of their albums from your excellent Blog. I will now make a habit of visiting here on a regular basis. cheers....JeffH