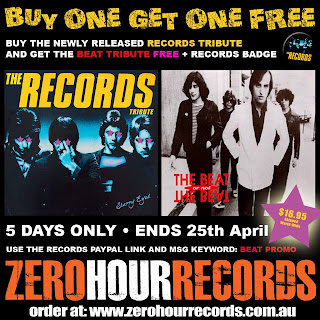 Zero Hour Records has just dug up Beat Tribute CDs that they never knew they had, good news for us!

Buy The Records Tribute and get The Beat Tribute plus a Records Badge too for just  $16.95 PP World-Wide. Just use the Records link and add 'BEAT PROMO' in the message at checkout.  Tell your friends too! 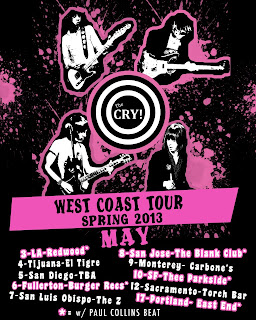 Portland Power Poppers “The CRY!” have announced dates for their upcoming West Coast Tour. The schedule includes a series of shows with legendary Power Pop icon The Paul Collins Beat.

The CRY!/Collins connection started last summer when Paul went to see The CRY! at Bowery Electric in NYC. Impressed, Paul went to see the band the next night as well. Since then, the two bands have been looking for opportunities to do some dates together. That opportunity is here!

The CRY!, currently #1 on The Reverbnation US punk/power pop charts, is touring in support of their debut LP (The CRY!) and the recent 7” release of
“Discotheque” and “TCP” (The Boys/cover) on Mooster Records.

In March 2013 The CRY! earned even more international attention when Pabst Blue Ribbon Beer selected them to help celebrate the 10year anniversary of The Exploding Hearts “Guitar Romantic” LP by performing/recording "Thorns And Roses" and “Modern Kicks”.


The CRY! is currently finishing production on their high anticipated sophomore effort. So far the band has only given fans a few sneak peeks at the new material. New LP tracks will include “Seventeen” and “Dangerous Game”. 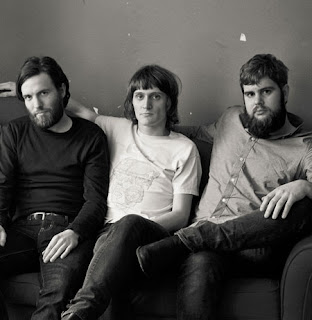 Telstar Sound Drone will release their debut album on Bad Afro May 27th. The album is called Comedown and will be released as LP and download. Expect feedback-ridden psychedelic rock as well as slow heavy psych.

The Telstar Sound Drone formed in 2007 when Hans Beck convinced Mads Saaby to join him in a project called Les Aprés L’amour Sonnes, an artist collective working with media such as sound and video. The first project was to add sound to old educational movies, playing along with the projections. With the addition of Sean Jardenbæk the project turned into a band and settled with the name The Telstar Sound Drone.

The band recorded a self-titled EP that led to a show at Roskilde Festival in 2009. After that The Telstar Sound Drone took a break while internal problems almost destroyed the band. At one point Hans Beck was the only member of the band playing all the instruments. The problems were solved and in spring 2011 they released the Mirror Pieces 7” on Bad Afro.

It has taken some time for the band to finally get Comedown finished which is also due to fact that Hans Beck and Mads Saaby also play in Baby Woodrose and have been touring Europe a lot for the past couple of years. 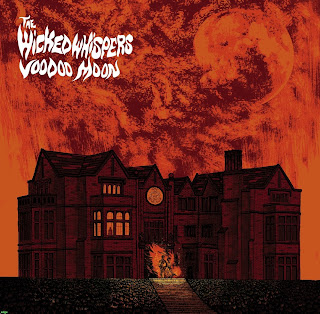 Since The Wicked Whispers and Electone debut 10” in 2011 exploded into the latest indie releases from seemingly nowhere, immediately picking up airplay from 6Music and achieving veritable reviews in the monthly glossy music rags way before the late 2012 renaissance of the music, the band have rolled and gathered no moss. After gaining fans across Europe and America and packing in some high profile gigs along the way the young Liverpudlian quintet returned with the harder hitting ‘Dandelion Eyes’ (recorded at London’s famed Toe Rag Studios – The White Stripes, The Zutons, Supergrass, Tame Impala) with Michael Murphy’s plaintive warbling vocals packing Country Joe, Grace Slick and the whole San Franciscan vibe into three delightful minutes. New seven inch ‘Voodoo Moon’ features another track from that famed Toe Rag session based on Murphy’s enchantment with the forever-beautiful actress Audrey Hepburn. Softer in tone than its predecessor the singer’s shimmering, yearning vocal and a piping Farfisa create a romantic psychedelic pop sound that could have quite easily been made by a late ’60s New England Ivy League school band in thrall with The Zombies and Donovan. The equally strong flipside ‘Nightbird’ (which features ex Zutons’ guitarist Paul Molloy and Austin Murphy on saxophone and flute) has something of the early Doors and Seeds about it. More garage but just as tuneful – and the guitar stuns!

The Wicked Whispers yet again grasp the melodies, lyrics and superb song structures of all those great “old bands” yet play with the vitality and youthfulness that is winning over today’s audiences.

Third time’s the charm. Let ‘Voodoo Moon’ shine on you.