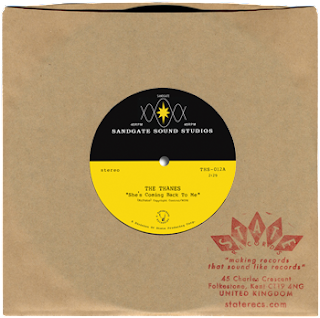 The Thanes have long been ambassadors of ’60s folk-punk and garage pop jangle, so it's not really surprising that their new single should reflect these distinct qualities. In fact they were making records like this before the new breed of mid-6os loving kids were even born. But that’s not to say they’re old hat. Singer and guitarist Lenny Helsing has led a plethora of line-up changes – now settled on Angus McPake (12-string guitar / organ / vocals), Mark Hunter (bass / vocals) and Mike Goodwin (dums) – that reaches back to the mid-80s; but unlike some of their more visual and visceral ’80s contemporaries the group never succumbed to an over use of fuzztone and onstage bombast, keeping their approach and style far more oblique and honest. The Thanes’ distinct sound has changed little over the years too. Whilst bands have come and gone and moved onto new pastures they have continued to focus on a format of perfecting the mid-60s jangle of LA bands that “Love-d” The Byrds (ie The Dovers), the weirdly mixed-up beat of Dutch bands like The Outsiders and Q65 and the minor-key moodiness of Scottish ancestors The Poets. Their music has never dated or aged. It remains undiminished.

‘She's Coming Back To Me’ is a perfectly encapsulated melodic slice of jangly garage furnished with short jabs of fuzz across the chorus. Unexpectedly, it then veers off into a whirligig of jazz-spiked 12-string … and back again, as authentic in spirit and sound and as tightly constructed as any of ye olde garage nuggets that so often gain spins on 6 Music and beyond.

The flip-side houses the group’s reading of ‘Love Is Fading Away’, originally recorded by The Poets back in the autumn of 1965, but not released commercially until 30 years later. Although The Thanes’ version was recorded before the death – in August 2012 – of Poets’ founder, lead singer and songwriter George Gallacher, it now serves as the group's poignant tribute to the memory of their great friend, musical compatriot and truly dynamic voice! Between 2010-2012 The Thanes led an interesting double-life, playing as The Poets, featuring George Gallacher and guitarist Fraser Watson, breathing new life into and giving a distinct edge to the group’s much-loved Decca and Immediate material. If much of Scotland are fretting over independence The Thanes are single handedly keeping the music of the nation’s finest beat group alive. Frankly, it is that important!

These latest waxings are fruits born out of sessions undertaken in group member Angus McPake’s self-built Ravencraig studio complex deep in the heart of Edinburgh. As with both State and Toe Rag recordings the analogue recordings leap out of the speakers.

The Thanes - She's Coming Back To Me

THE THANES
She's Coming Back To Me / Love Is Fading Away 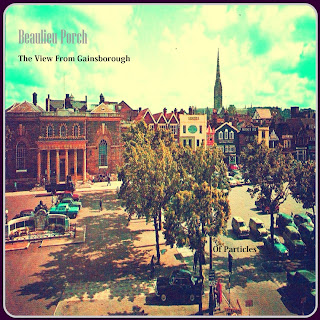 Beaulieu Porch is the work of one man, Simon Berry. He writes, plays and records his orchestrated, baroque psychedelic pop songs on his home studio in a secluded spot in the south of England. He creates all the artwork, and releases his records through his own burgeoning label, Tillsammans Records. The debut, self-titled album was released at the tail end of last year to a clamour of praise and critical appreciation, appearing shoulder to shoulder with the likes of Tame Impala and Brian Jonestown Massacre in several end of year “best of” charts. The follow up album, We Are Beautiful, released this year, has already appeared in several best of 2013 lists, alongside Jacco Gardner, Temples, Foxygen et al, picking up some marvellous reviews on the way..." A sublime work" (The Sound Of Confusion Blog)..."absolutely stunning" (Sound Injections Blog)..."effortless hooks spilling out and intimate pop mastery virtually bubbling up at every turn" (Sunrise Ocean Bender Blog) and "very much an essential purchase" (Shindig!​ Magazine).

The View From Gainsborough’ is a galvanic slice of pure modern psychedelic pop; swathes of backwards guitar chords over crashing drums and tambourines introduce a floating, harpsichord led verse, and the catchy, sing-a-long "Let me be you guide, to the other side" chorus will be lodged firmly in your open mind. If you listen carefully towards the end, you may hear, among the strings and guitars, something that sounds like a latin mass sung backward at the wrong speed in a high pitch.

Beaulieu Porch - The View From Gainsborough 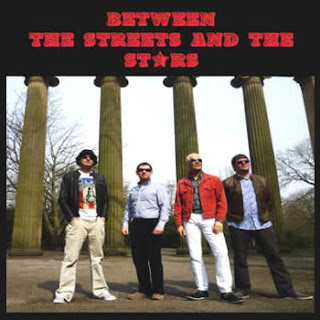 Although Manchester is home to The Electric Stars they’re not just another Northern act trying to rekindle the past indie glories of The Smiths and Stone Roses. Renowned Manc diva Denise Johnson (she of those great Primal Scream records ‘Movin’ On Up’ etc) showed up on last year’s critically acclaimed Sonic Candy Soul album singing some gutsy gospel backing vocals on the Gram/Stones/Scream vibed ‘Stoned Again’. There’s a similar edge too on ‘Every Now And Then’ (this single’s exclusive track) that packs a country-honk swagger to rival Exile…

If the majority of the Stars’ music is certainly more inspired by those halcyon days of the mid-60s through mid-70s (touching on wide eyed psychedelic pop, raunchy rhythm and blooze and glamish pop/rock) it’s all faultlessly topped off with a polished contemporary pop edge that is crying out for daytime radio play and a tabloid newspaper fan base. Working class pop music, honed on good times.

Jason Edge predominantly sings in a gently effete manner, more Blunstone than anyone, but he can easily slip into that louche Jagger white man sings the blues after a Jack and coke mode, heard here on ‘Every Now And Then’. The two accompanying tracks from the Sonic Candy Soul album take in ‘Between The Streets And The Stars’’ 1966 styled mod/pop style and the far darker hued drama of ‘Bedtime Stories’, which could have been made by an early ’80s act informed by Bowie’s Berlin period.

These three songs air The Electric Stars various strands. Although immensely different they slot together like Ikea furniture. It all clicks!

The Electric Stars - Between The Sheets And The Stars 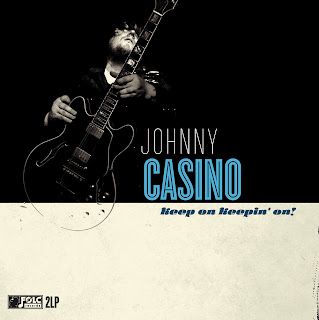 Johnny Casino is one of the most admired and respected musicians of the Rock&Roll scene of Australia. He was guitarist and leader of Asteroid B-612, having a good success in the middle of the 90’s. He also lead other great bands, such as the superband The Egos, or the American Johnny Casino’s Easy Action. In the last years, he decided to concentrate on Johnny Casino & the Secrets in addition to collaborating with other great Australian musicians. This double LP is a compilation of the best songs of this wonderful guitarist, singer and songwriter, till now only released on cd.