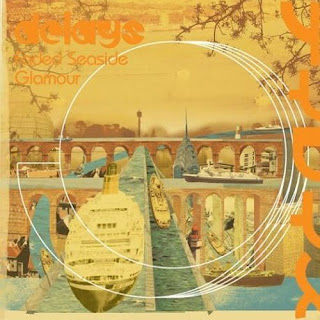 Had Delays arrived when the Brit-pop battle between Blur and Oasis was wooing music fans during the mid-'90s, their warm pop sound wouldn't have stood a chance. They would have gone the way of Baby Bird, Cast, and Menswear, praised for a few hit singles and later proving to the English press that they're more than just a fashion statement before finally fizzling out. Luckily the brothers Gilbert and the brothers Fox gave up that dream with their band Corky and switched formats for Delays. Faded Seaside Glamour trades in the band's dreary English roots for radiating waves and rays of '60s California pop. It's a slick transition, an honest presentation soaked in Delays' crisp musicianship and the foursome's lush harmonies. From the steel drum ring of "Wanderlust," Faded Seaside Glamour instantly comes off genuine. Frontman Greg Gilbert delivers a lamblike falsetto, an intriguing arrangement that's both gentle and slightly unrefined, much like the sand and the sea itself. Delays take comfort in seeing the world through an aged set of eyes, and songs such as the amber lull of "Nearer Than Heaven" and the brisk acoustic guitars of "No Ending" accept an innocence lost. Still, enthusiasm glitters throughout Faded Seaside Glamour, and it's partly because of Gilbert's girlishly sweet vocals. Between that and the band's honest to goodness melodic tones, such an equation is hardly deniable. "Long Time Coming" flirts with these exact hints of wonder as does "Hey Girl," the album's shiniest moment. Some of summer's tufts turn soft during the bulk of Faded Seaside Glamour and concluding its charming grace is the neo-psychedelic gospel of "On." All in all, Delays look beyond Coldplay's pretty heartaches and the luminous power of Doves. For what could have been a quick visit years ago, Delays showed up at the right time. -AMG

this is a GREAT cd....i had heard about them last year or so and got this one the "Faded..." disc as well, and there are some great moments...."Hey Girl" is a great pop track everyone needs to hear....thanks!!! jim