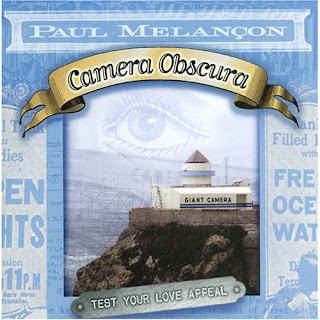 Paul Melancon has managed to pull off something rather extraordinary with the aptly titled Camera Obscura. Indeed, he offers listeners a series of pop music snapshots, each having a unique allusion to something that is not at all obvious to the naked ear. As enjoyable as this record is as background or driving ambience, you really need to listen closely and thoughtfully to get the full scope of Melancon's talent and really understand the twists and turns of his characters and stories. You see, the running theme of this particular work is a fictitious California amusement park and the star-crossed lovers therein. Again, you really need to pay attention here, lest the indelible melodies fool you into thinking there's a happy ending awaiting your arrival. And how "Jeff Lynne" fits into the scheme of things is yours for the figuring. As far as the songwriting goes, Michael Penn and Neil Finn are the closest approximations, just to give you a ballpark reference, though sonically Melancon has something slightly different going on. It's impossible to set the parameters of his sound and work, but it will remind you of something somewhere that was pleasant. Atlanta has had the privilege of enjoying Melancon's previous work. Thank goodness Amy Ray and her Daemon Records saw fit to share this one with everyone else. -AMG 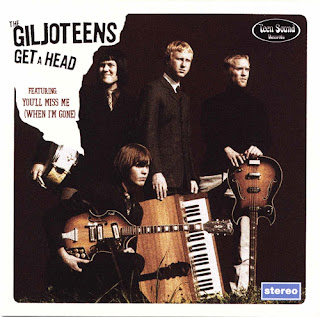 Swedish garage punk bands are known worldwide to be on top. Since the mid eighties garage invasion we've heard some of the best acts from their cool north lands: StomachMouths, Crimson Shadows, Wylde Mammoths, Backdoor Men,(early) Creeps etc..This is the kind of record that will definitely win both 60's purist and 80's garage revivalist. 13 tracks that will give you the right vibes. It's time to go back in the garage and dig out the real thing...The Giljoteens are already there, looking for your head... 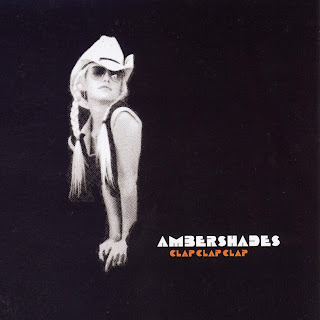 If it weren't writ large in black and white you'd have trouble believing this gem to be a debut single. For a start, Ambershades Clap Clap Clap presents the talents of vocalist Davey La, who instantly reminds of Julian Casablancas.
And the Americana music spans the worlds of Stealer's Wheel, The Beach Boys and The Flaming Lips, all the while maintaining invention and humour in spades. Yes, that good.
Not for them a naff B-side either. Hello Hello is a country-western influenced little number that'll make you wish you could click your fingers. Unless, of course, you can. Single closer Too Much is simply a misnomer. Such a thing could not be possible where this lot are concerned. - Michael Hubbard 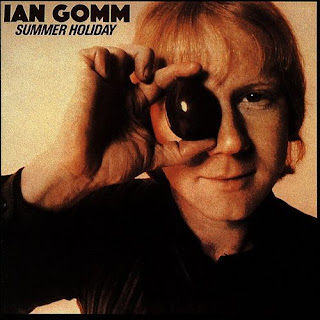 The British version of the U.S. Gomm With the Wind album, Summer Holiday boasts one of the best sleeves on the era, a collection of happy snapshots presumably taken on the Gomm family's last summer vacation, and alive with all the thrills and spills of a couple of weeks at Butlins.

The music, too, has a bright, summery feel. Gomm's past as a member of Brinsley Schwarz is seldom far from view, as he drives down the same pop-rocking avenues as that band was wont to, and which fellow refugee Nick Lowe was now perfecting. But, whereas both of Lowe's albums to date labored ever-so-slightly beneath their maker's reputation for "clever" songwriting and sneaky pilfering, Summer Holiday remains radiant throughout. And, just in case any last doubts should still be lingering, one of the album's most powerful numbers answers any questions that the Lowe comparisons might raise -- "That's the Way I Rock 'n' Roll."

Elsewhere, Gomm's take on the Beatles' "You Can't Do That" rates among that song's most inspired retakes, and inspired what would become his own best-loved recording, a similarly rearranged rendition of Chuck Berry's "Come On." Issued as a single shortly after the album appeared, "Come On" came so close to landing Gomm a major hit single that it was hastily added to the album; oddly, however, the sleeve was never updated to reflect the change, rendering the addition a shade redundant, to say the least. But that really should be beside the fact. With or without "Come On," Summer Holiday remains a terrific album, one of the best of all fruits of the original Schwarz cabal. -AMG 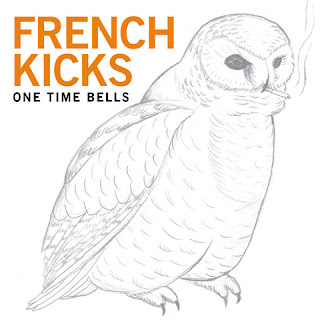 On their debut full-length One Time Bells, the French Kicks polish and expand on the endearingly messy post-punk of their previous work, opting for sculpted hooks and eclectic arrangements instead of garage rock bluster. Like their labelmates the Walkmen, the Kicks take an arty, stylized approach, making their pared-down rock anything but basic; off-kilter keyboard lines and backing vocals keep the tight, insistent riffs on songs like "Wrong Side" and "When You Heard You" from becoming too claustrophobic. A previously unheard sensitive side to the group's sound also surfaces on One Time Bells, particularly on the bittersweet, bouncy "Down Now"; the Anglo pop-tinged "Crying Just for Show"; and the wonderful "Close to Modern," a shimmering, jittery fusion of new wave and '60s soul that also recalls some of Modest Mouse's and the Dismemberment Plan's best moments. In fact, with the exception of the raucous "1985" and the jagged groove of the title track, the group breaks almost entirely from the punky, garagey sound of their self-titled and Young Lawyer EPs. While the appealing rawness of their early material is occasionally missed here, the strides forward that the group makes on this album more than make up for it. Simple and catchy enough to be interesting on the first listen and quirky enough to remain interesting afterward, One Time Bells proves that the French Kicks are only getting better. -AMG 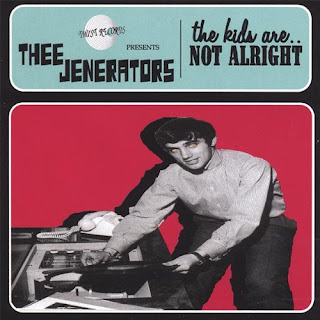 Thee Jenerators are a high octane rock n roll band very exciting live with sharp melodic songs drawing on influences from the 50’s 60’s and 70’s which include freakbeat and soul sounds to power pop and rockabilly. this is their new set of songs recorded live at gizzard studio with mr ed deegan. using analogue equipment the bands personnel include Steve Lynch guitar who uses a tuneful but full Gretsch sound, Nick Dodd who pins the backbeat down with his natty jazz bass riffs and hammer of the gods Stuart Ozzy Austin who plays the drums, augmented by the harmonies and full on tuba riffs of double sax players Garrick Jones and Henry Castledine, the band is fronted by record label head and the wild man antics of Mark Le Gallez - CD Baby. 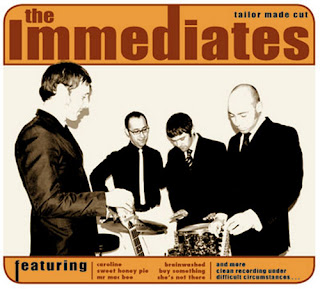 WOW! Sounding like they could've been on Andrew Oldham's great Immediate label back in the late 60's, this is top notch guitar and Hammond fueled Mod/garage pop rock outta France! The band formed in 1995 out of the gathering of musicians coming from various garage bands (among which Stinky Spider) and have reached their present state after the arrival of two new recruits, François and Xavier (ex-Looneys), a buoyant organist and jumpy performer on stage. The sound of the band was then deeply modified with the organ flying high over the beats. On this 12-tracker, they dish out nine tasty originals along with blistering covers of "She's Not There" by The Zombies, "Brainwashed" by The Kinks, and "Mrs. Applegate" by The Apemen! Originals like "Silly Thing" start out all Kink-ish, then go into a Yardbirds-like "rave up"! "Book Of Yours" is very Who-like! "Mr. mac Bee" makes great use of the "Taxman" (Beatles)/"Start" (The Jam") trademark riffs combined with an original twist all their own! They expertly display Freak Beat, elegant ties, vocal harmonies, Vespa scooters and British beats all at once in one extremely tight bundle! These guys will appeal "immediate"ly (no pun intended) to fans of The Prisoners, The Kinks, The Who, The Small Faces, The Green Circles and great organ-laced garage pop in general! Can't say enough about this one! GREAT!! -Kool Kat Musik 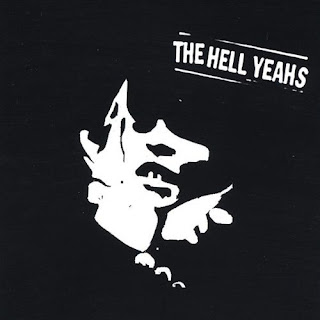 There's something about a band that has swagger and attitude, but when the music to back it up, there's something special there. The Hell Yeahs do a better job at bringing low down dirty rawk 'n' roll to the masses than The Murder City Devils. The Hell Yeahs pull it off because you can dance to every freakin' song. Now I know that's not "cool" or "rad" or "hip" to dance at rock shows anymore. The kids in the Northwest would rather tap their toes and nod their heads, but MCD brought us up to the line. We were almost ready to shake our booties, and then they broke up. But for those of us still standing at that line, The Hell Yeahs are going to push us over. How can you deny the body's shimmy shake response to the Hammond organ in "Can't Do What I Should"? The pounding rhythm of "Sympathy For Brian Jones" get your toes tappin' infects your leg and travels up your body until you find yourself - gasp - dancing! The Hell Yeahs are the great new hope for a rebirth of dirty American mod music. Kids, let go of the indie rock pretension and let your bodies move to the sound of The Hell Yeahs. -CD Baby 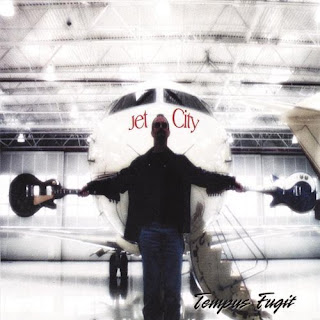