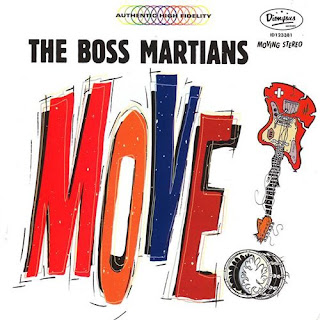 For their third and final album for the Dionysus label, the Boss Martians haven't moved too far away from their reverent yet formulaic rendering of mid-'60s West Coast teen rock, rockabilly, surf, garage rock, and power pop. In 1998, the Seattle-based band's longtime drummer, Dan Israel, departed from the group, forcing group leader/guitarist/vocalist Evan Foster to recruit former Untamed Youth drummer Joel Trueblood for their next recording sessions. Bassist Scott Betts was the next to leave, taking off on his honeymoon; he was replaced by Steve "Esquerita" Davis. Finally, drummer Jason Reavis came aboard, taking over for the substituting Trueblood. With this game of musical chairs going on during the recordings, you'd half expect the new lineup to have invigorated the group, but all it does is point out that Foster and his group don't seem to want to be taken too seriously anyway. For the most part, the Boss Martians are still replicating the same stuff they've been doing since they formed eight years earlier. Move! -- clocking in at a mere 35 minutes -- is a ramshackle mix of '60s song styles and subgenres, pinballing between vocal tracks and various odd instrumentals. Of the latter, the surfalicious "The Last Ride" has a nice vibrato electric piano break, while the perky "Intermission" is a bossa nova-meets-Korla Pandit bit of whimsy. "Trouble on Two Wheels" veers off the path and crashes into a Middle Eastern-sounding klezmer breakdown with a clarinet riff that couldn't possibly sound more out-of-place on a rock & roll album. Other instrumentals include "Chihuahua del Diablo," a slow, Latinesque surf instrumental with a sultry acoustic guitar lead, and "Pandilla en Motocicleta," which sounds like an uninspired mix of Davie Allan's polished '90s-style fuzz guitar and standard disco drumbeats. The vocal tracks fare better, though they're a scattershot mix as well. "Never Trust a Chick (In a 3 Window Coupe)" wouldn't have sounded too out of place on a Bobby Fuller Four's hot rod album. Several of the other tracks are muscular power pop, the kind that Paul Collins' Beat or 20/20 used to play back in the early '80s; not too surprisingly, both Foster and keyboardist Nick Contento also have a power pop band, the Mystery Action. The rumbling "This Time Around" has a ripping guitar lead and a simplistic synth riff that repeats, ad infinitum. Foster even tosses an unnecessary wah-wah guitar into the title track, "Move!" Foster's chirpy Beach Boys-style vocals are somewhat huskier throughout, especially on "She's In, You're Gone," which, as the leadoff track, is probably the album's best track. "Introducing - The 1971 Dodge Super Bee" and "Bad Ass Dodge '71 Super Bee" are just plain corny, nuff said, and the band's cover of the Kingsmen's "Little Sally Tease" comes across as largely uneventful. An unlisted bonus track is tacked on to the end of track 14. -AMG

Thanks a lot. I saw the Boss Martians earlier this year and they put on a good live show.