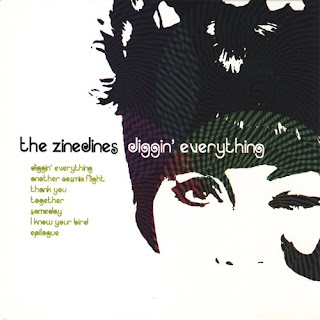 With the name as it is, the soccer analogy is inevitable. The Zinedines handle their musical sounds like the world famous footballer handles the ball, they caress it, dangle it in front of you, spin it around you, and before you know it, it’s launch into space to the delight their fans.
The Zinedines story began in 1998 in Wall (Majorca), brothers Manel and Miquel Martínez, dedicated fans of psychedelic rock music, referencing early Floyd, Hendrix and the Beatles, were the founding members. Their 1999 debut, I’m Gonna Rise, included a version of Floyd’s 1967 masterpiece, Astronomy Domine. The release brought about their first acclaim as a band to watch in Spain’s prolific and vibrant power pop and psychedelic rock scene, a scene that boasts many Rainbow Quartz acts; Sidonie, Gallygows, the Gurus and the Winnerys to name check a few.
It wouldn’t be until the 2002 release of their second long player (only 7 songs), Diggin’ Everything that the Zinedines received the success and recognition they deserved. The recording blended rich melodies, strings and epic choruses. It was during the recording of Diggin’ Everything that the band took a new shape, Marti Vallespir came in on drums, and Juanjo Tomas enters on Bass, lending some vocal tracks. -rainbowquartz.com 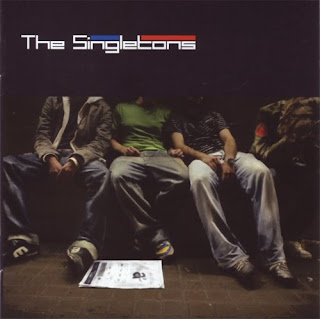 The Singletons are four characters hung with a series of concepts. Namely, in order: the rock, guitars, electricity, partying, alcohol and costumes. A cocktail is not exactly original but in his hands, takes on new dimension. Veterans, despite their youth, the Barcelona scene, there is a single table on the stage of Barcelona who has not seen, heard and vibrated with her powerful and direct delusional. Their material draws on a variety of sources and exudes old-fashioned rock'n'roll.
And after all this time throwing elbow to elbow with Beating Records 'The Singletons' Musiclan recorded and mastered at Sterling Sound, the firstborn of what is expected a very long and successful offspring. In his debut are all virtues that make them one of the most promising of the national independent scene. Listening to this album one would come to mind effluvia of the new wave, brit pop flavors more energetic, less orthodox punk pieces, touches of The Verve, The Jam, early Oasis, the Johnny Thunders' Heartbreakers, The Only Ones , Elvis Costello, Stiff Little Fingers ... endless references to which more attractive. And, more surprisingly, only sound like themselves. -thesingletons.es 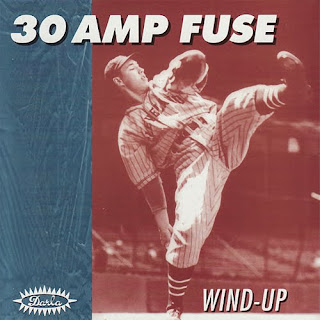 With their musical that has been described as "crunch pop," 30 Amp Fuse has provided their hometown of Knoxville, Tennessee with a high speed of aggressive power-pop. Debuting in 1995 with their first full-length Wind Up, the line-up of Mike Smithers (vocals/ guitar), Jason Ratliff (drums) and Joshua Bentley (bass) followed with a signing to the BMG distributed label Dedicated. -AMG 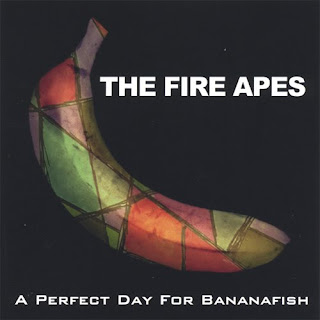 From Charleston, South Carolina, THE FIRE APES' lead singer, songwriter, guitarist, and bassist, John Seymour, writes about love and relationships often using literary references, musically framed with melodic hooks. His music and words can elicit feelings that range from joy and happiness to commiseration and longing.
The feel of the music is most commonly considered to be reminiscent of such bands as The Beatles, Gerry and The Pace Makers, The Kinks, Oasis, and early Pretenders. THE FIRE APES have played in the Southeast and have gained a large following based on their performances and their first release "A Perfect Day for Bannafish". -CD Baby 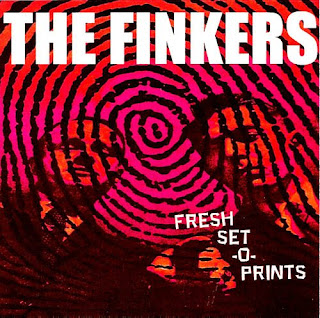 Founded by former Pyramidiacs and Crusaders skin-pounder Mickster, The Finkers were born out of his desire to make music that would leave a rock and roll stamp on the purest of melodies. In other words, a brand of power pop that appreciates the "power" without sacrificing the "pop". Naturally, the next step was to find the musical soulmates that would help bring such songs to life, right?
Well, it became clear in the band's evolution that vocalist/bassist Michael Carpenter (who adds his own production flair to the proceedings along with Mickster) and guitarists Matt Allison and Mick O'Regan were the ones to heed the call-to-arms. The momentum now there, The Finkers went ahead and did something about it. That "something" was to win converts with their live shows in their native Australia (such as with their prime slots opening for You Am I, DM3 & Even), and to continue to write and record music that can stir the soul as well as make walls tumble down. We're talking about a serious rock and roll work ethic here - one that accounts for two remarkable full length recordings released barely a year apart!
There's a party in these grooves, friends, where everything good about rock and roll lives - powerful hooks, pounding beats, glowing harmonies, and songs ranging from rowdy shouts to pure pop splendour. All throughout, The Finkers never lose sight and never waver from their determination to have as much fun as possible -mmusic.com.au/ 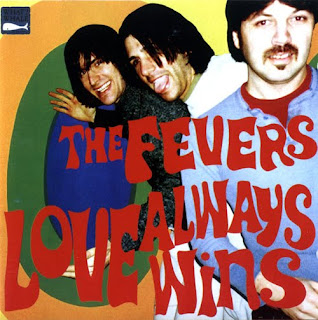 As powerpop as Teenage Head, Nerves and Knack (without ties & laughing all the way to the bank) while taking their cues from the "odd" bubblegum craze boy groups of the 60's and injecting stunning "nice guy" 60's harmonies. No need for gimmicks here, they just love to rock. They love it loud but they dont wanna be "LOUD" like most of the others out there. The combination of Gavin's undeniably distinguished raspy voice, backed by that foot-tapping juice-driving heart-soaring lead guitar with Who-ish rough punchiness creates a sound that is simple but surprising, intense but subtle and shining, shining bright.-bomp 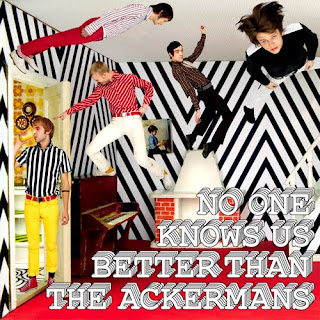 The Achermans sound is catchy and flashy as it only can be. We like to see girls dance, jump, scream and shout. And we love to put out records that beat out the guts out of any hyped UK beardie-band full of douchies in cord trousers! We´re the saviors preventing the girls of that worthless rubbish, for the sake of real pop music! Go get this for the girls around ya! For car listening customers, count the days till you get arrested for acting goofy in public traffic. The Ackermans give us a pure fun joyride right to the summer. The recordings are ace and “nobody knows us better than..” is a hyperactive POWER POP album for fans of late ´70 punk edginess in the vein of 999 and modern-day evocative scandinavian garage rock outfits as the HIVES, MANIKINS or the stellar pop sensibilities of the YUM YUMS and the BOSS MARTIANS latest two albums with the wailing of the CAESARS. Yep, that level, you can be sure if WE tell that, we ain´t shitting you(r girlfriend). With the loud guitars, the adrenalized and totally on the spot vocals and a firecracker backbeat this Pop record will make you bounce your cheap flat walls off!! -aliensnatch.de 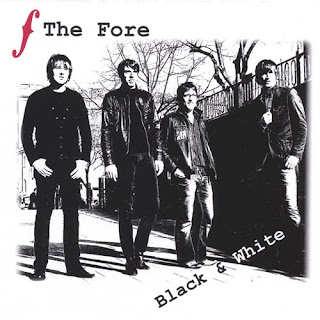 If you were listening to the Kinks, Small faces or the Beatles, and a Fore demo dropped in to your play list you wouldn't notice the huge generation gap. The Fore have bought a time machine and travelled from the 60's to the twenty first century to bring the true sounds of that past generation back to you. The Fore are not a tribute band by any means, yet they have captured the essence of the 60’s music scene and made it there own. -Broccoli Music 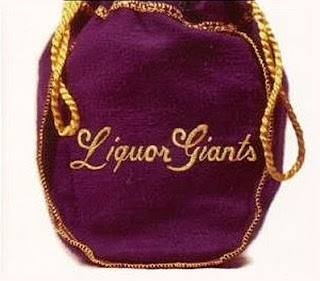 Anyone who had any notion that the Liquor Giants were a band in the traditional democratic sense pretty much lost their illusions with the release of the "group"'s third album (simply called Liquor Giants), which featured Ward Dotson on lead guitar, rhythm guitar, bass, lead vocals, backing vocals, occasional keyboards, and pretty much everything else except for the drums (played by one-time Pontiac Brothers howler Matt Simon), organ on two cuts, and a dollop of female backing harmonies. However, Mr. Dotson's adventures in multi-tracking also made it clear he didn't need a lot of help to make a great record; quite simply, Liquor Giants was the best record he'd played on since Fiesta en la Biblioteca in 1986. The songs find Dotson at the top of his game, writing pop tunes that have heart, soul, and plenty of backbone (the last a rare commodity in such things); "Chocolate Clown" melds goofy lyrics with a melody that'll stick in your head and grab your heart, "Bastanchury Park" sounds like some lost British Invasion classic, "$100 Car" and "Jerked Around" show Dotson can still write a first-class rocker when he's of a mind, "Fake Love" and "Hey You" offer further perspectives on that most classic of pop song subjects, love gone wrong, and "Here" finds him making with the twangy stuff and doing quite well with it. High on great music and low on pretense, Liquor Giants is the Ward Dotson esthetic defined, and while he's always known how to make the most of a great band, it seems he can also get along just fine without one. It's enough to make a guy believe in overdubbing again. -AMG 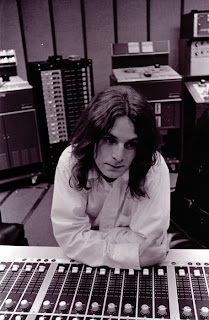 AP) Singer and guitarist Alex Chilton, who topped the charts as a teen and later became a cult hero with Big Star, died Wednesday. He was 59.

Chilton died at a hospital in New Orleans after experiencing what appeared to be heart problems, said his longtime friend John Fry. Fry said Chilton's wife, Laura, was very distressed by the unexpected death.

"Alex was an amazingly talented person, not just as a musician and vocalist and a songwriter, but he was intelligent and well read and interested in a wide number of music genres," said Fry, the owner of Memphis-based Ardent Studios.

As the teenage singer for the pop-soul outfit the Box Tops, Chilton topped the charts with the band's song "The Letter" in 1967. Their other hits were "Soul Deep" and "Cry Like a Baby." Chilton grew up in Memphis, Tenn., and formed the band with friends from school.

His short run with Big Star brought less mainstream success but made him a cult hero to other rock musicians, as evidenced by the title of the 1987 Replacements song, "Alex Chilton." Big Star's three 1970s albums all earned spots on Rolling Stone magazine's list of the 500 greatest.

Chilton said in a 1987 interview with The Associated Press that he didn't mind flying under the radar with Big Star and later as a solo artist.

"What would be ideal would be to make a ton of money and have nobody know about you," he said. "Fame has a lot of baggage to carry around. I wouldn't want to be like Bruce Springsteen. I don't need that much money and wouldn't want to have 20 bodyguards following me."

"If I did become really popular, the critics probably wouldn't like me all that much," he said. "They like to root for the underdog."

Chilton had been scheduled to perform with Big Star on Saturday at the South by Southwest music festival in Austin, Texas.
Posted by Curty Ray 3 comments: