Power Pop in the Twenty-First Century 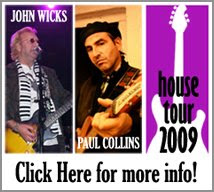 Times are changing, that is for sure, but you can still hear great live music the way it used to be in the good old days, and now you can hear it in the comfort of your own home. John Wicks and Paul Collins have teamed up to bring their music to you in the Living Room House Concert format. Both John and Paul made their mark years ago in the burgeoning power pop scene of the late seventies and early eighties. On opposite sides of the pond, they created and formed bands of lasting impact and quality. John Wicks, founding member of The Records, will always be remembered for Starry Eyes, a classic among classics and Paul’s work with The Nerves and The Beat have stood the test of time with Power Pop hits like “Hanging on the Telephone”, “Rock and Roll Girl”, and “Don’t Wait Up For Me”. Both John and Paul are active performers who are regularly out there tearing it up on stages in this country and abroad. After exchanging emails from coast to coast they finally met up at one of John’s live shows in . A friendship developed and now for the first time they have joined forces to make their music available to you in this intimate and informal setting. Both artists are superlative songwriters and the acoustic guitar is their instrument of choice to create with. This is not a watered down version of what you would see if they were performing with a band behind them, and they both do. This is an up close and personal look at two performers who love music and have dedicated the major part of their lives to it. These two gentlemen have seen and done a lot and as performers they love to share, so stories would abound of all their exploits over the years coupled with an evening of fantastic songs.

If you’d like to see John Wicks and Paul Collins perform in YOUR living room, email martinitimerossi@gmail.com (Attn: Rick Rossi) with your location, date you would like to have the event, and phone number where you can be reached. Every serious inquiry will receive a response with available dates and applicable performance fees.