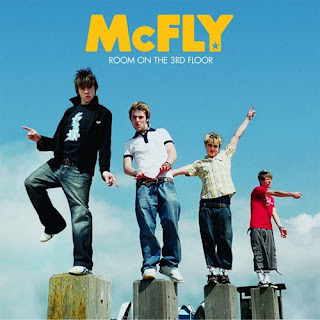 When a vacancy appears in pop music, it doesn't take long to fill it. As Busted moved out of pure pop into more serious material, the way was left open for McFly to capture teenage girls' hearts with their debut album, Room on the 3rd Floor. Named after the character in the Back to the Future trilogy and sounding like an updated 2000s garage band with close harmonies and raw guitars, McFly opened their album with two number one singles, "5 Colours in Her Hair" and "Obviously," so Room on the 3rd Floor really couldn't fail -- and it didn't, hitting the top on its first week of release. "That Girl," the third single released, could have sat easily on a Beach Boys album from the 1960s, or possibly even the early Beatles with the count of "one two three four" before a guitar crashes in. "Surfer Babe" (fairly predictably) and "Down by the Lake" were also Beach Boys-sounding tracks. It's not that good, however -- just a fun summery mid-2000s pop album from four lads who sound as if they were enjoying themselves singing mostly about girls. "Met This Girl" also took its influences from the Rolling Stones of the 1960s with a touch of Manfred Mann's fast-paced blues. "Everybody likes to party on a Saturday night," claimed the lads on the track "Saturday Night," and if you were about 13 years old and female, this was the album of summer 2004. -AMG

Just wanted to say thank you for such an excellent blog. Without you I would never have heard of most of these PP outfits. You actually got me into Dom Mariani's work especially.

However why are you posting a Mcfly album? They have nothing to do with PP and are just a lame record company backed boyband.

Hey just wanna say that the person above is being a bit harsh on McFly, i mean their not exactly my cup of tea either but it's a bit rude to the people that do like them. So all in all i just wanted to say chill out and let them blog about whatever they want.

Thanks for the rs link by the way, my friend and me appreciated being reminded of raving to McFly when we were younger lol :)