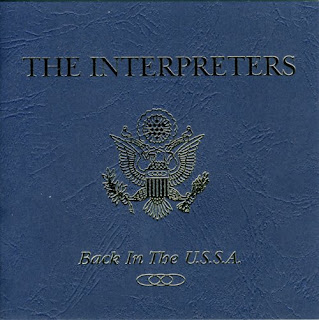 This trio is from Philadelphia? Back in the U.S.S.A. was actually recorded in London, and every band who this jacked-up pack of power pop punksters hints at appears to be British, both of old and recent vintages. Their older 7" single (the B-side of which, "Dogskin Report," is included here) was produced by mod legend Shel Talmy, the man behind the desk for the early smashes by the 1964-1966 Kinks, Who, and Easybeats (among others). So it's not surprising that the Interpreters pay tribute to one of Talmy's biggest hits by filching the signature riff of "My Generation" for the opening of "Ironic...Blowout." But far from a revival of that high-octane sound and style -- though there is a little first-two LPs Jam, Purple Hearts, and Jolt to the songs -- the hyper-pogo brand on display, sometimes with jazzy horns, actually places this band closer to a cross between Supergrass and Bis, if the latter could play better and wrote catchy songs, and if the former had even more outrageous teen energy. With many a song and surge reminding one of Supergrass' "Strange Ones" or "Caught By the Fuzz," only with less nasal singing, these folks are perhaps the happiest bunch of snot-nosed kids here. Since they slot in well with the faster songs of Elastica or 3 Colours Red, they'd be leading the louder, harder end of the otherwise ridiculous Brit-pop scene if they were from Mayfair, not just recorded there. Ron A. Shaffer and the band's production are both American; cranking smackers such as "She Took It Shy" and the excellent, more restrained closer "Today and Every Day" hit one in the nose like an old Zero Boys, Kraut, or Shattered Faith LP: real punchy, real roaring, and real clean. -AMG

I've just started listening to this - WOW!!! This is great! How do such great albums come and go without a trace? Thanks for unearthing this.

Curt, we share this in common too! I purchased this at a Tower Record store in DC when it came out after reading a review in the Washington Post comparing the band's sound to The Jam. I was not at all disappointed!

The verse in "Taking it Over" is an obvious homage to "Care of Cell 44" by the Zombies. Great stuff!

I would add that I thought their first mini album (In remembrance of that fine, fine evening) however was much. much better. Stronger tunes with better melodies.

I didn't even know they had a "first mini album." If anyone has it, could they please post or give to Curt to post?

(And what "fine, fine evening" are you refering to?)

I am loving this album in a big way. This is up alongside 'I should coco' for me. Gold

In rememberance of that fine fine evening. Thats the full title of their first ep on Volcano. It has that mid 90s britpop blur sound to a tee.

Great album! I had the pleasure of seeing them twice in the 90s. Great live band too. Tons of energy that lived up to the record. What ever happened to these guys???

check out the Modern Mothers..... it is Branko and Patsy's newest musical creation.... sans douche bag on bass.

check out the Modern Mothers..... it is Branko and Patsy's newest musical creation.... sans douche bag on bass.