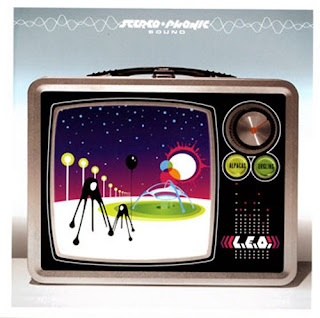 Alpacas Orgling is the sort of record that drives people who dislike the contemporary power pop underground scene absolutely out of their heads with rage. If those three letters look familiar, that's entirely by design: LEO is an unabashed re-creation of the sound of vintage late-'70s Electric Light Orchestra on an indie rock budget. The album's mastermind is Boston-based power popper Bleu McAuley, with key contributions from Mike Viola (formerly of the Candy Butchers), Papas Fritas' Tony Goddess, Andy Sturmer of Jellyfish and members of Hanson, Chicago (!!) and Self. The ELO lifts are subtle but unmistakable, with direct nods to tunes like "Telephone Line" and "Mr. Blue Sky" mixed in with bits that cleverly nod to Jeff Lynne's creamy pure pop goodness without actively ripping him off. It could possibly be the most clever album-length evocation of an established band's sound since the Rutles. "But that's all it is, right?" sneer the non-believers. "It's nothing but a baldfaced ripoff of the sainted Jeff Lynne, and with a silly album title besides!" Well, there's little defending the goofy album title other than the fact that it's fun to say, but here's the thing: Alpacas Orgling knocks McAuley's polite, pedestrian solo albums into a cocked hat. In fact, with the possible exception of Papas Fritas' unjustly overlooked second album, Helioself, a lost indie pop treasure of the late '90s, Alpacas Orgling is the single best album any of its major participants have ever taken part in. And yes, that includes the hugely overrated Jellyfish, a band much more interesting in concept than in practice. Given the self-limiting task of channeling their own pop sensibilities through those of an earlier generation of craftsmen causes all concerned to step up their game: the songs are gorgeously arranged, with instantly memorable melodies and lyrics generally far less pretentious than the sort of claptrap Jeff Lynne himself often came up with. Of course, the most logical next step is for McAuley, Viola and company to take the lessons learned from this project back to their primary careers, but as long as one is clear on the album's artistic intentions and is willing to approach this kind of wholesale imitation on its own playful level, this is an album any true lover of '70s AM radio pop fluff should treasure. -AMG

I really liked this cd, but the writer from AMG? Jellyfish overrated? Where? Except for readers of a couple of blogs like this one (and Drake Bell) who else knows who jellyfish even is?

Jellyfish, Mike Viola, Bleu...overrated??? Jeez, that AMG writer has ZERO clue. This is a fine album & Bleu is one of the best songwriters of our time. Hands down../

Marvellous record. The ELOisms are great without being overwhelming and suffocating the songwriting. Another superb choice Curty.

Many cooks most definitely did not spoil this meal. I first got this because of the fact that Andy Sturmer was on the team.

And from it I found Bleu. Though it's a bit of a pisser finding his own albums at sensible prices :(

I must admit I don't like this album as much as I though it was going to. Surely their take on 'Don't Bring Me Down' is a piss take? 'Ya Had Me Goin' is nice though. Also what's the story with the AMG reviewer saying that Jeff Lynne's lyrics are 'pretentious claptrap' ? :-)

I must say that I like Alpacas Orgling on this much more than the sounds made by real alpaca orgling. The title aroused and piqued my interest enough to get me to download the release. In case you don't know, "orgling" is the word which describes the sounds male alpacas make while mating. Most often it sounds like a slow "unhh-huhnnn uhnn-hunhhhh" over and over until the male finishes. This, indeed, sounds better. Why not Google "alpacas+orgling+wav" and see for yourself!

This is absolutely the gift that keeps on giving! A fantastic find!

What a nice album. I discovered it just a few months ago(i got it in my shelf since then). I didn't knew that you had posted in the past. Great pick Ray.

I didn't ask for this re-post in particular because i have this one already. But thank you once more,. Hope somebody else grabs it though, because it´s very good, specially if you like the E.L.O.