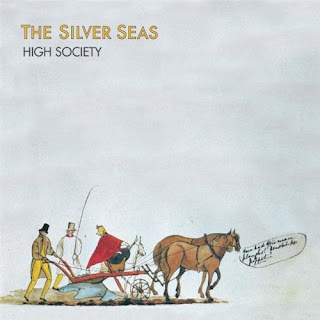 Rock has come roaring back in recent years, and it's now de rigueur for critics to hear most music through a '70s prism. Thus the Silver Seas (formerly the Bees) have found themselves tagged as soft rock and mentioned rather bizarrely in the same sentence as many of that genre's singer/songwriter heroes. In truth, though, the prior decade seems to be where the group draw much of their inspiration. Their harmonies, for instance, oft times echo the Beach Boys, particularly on the lavish "We'll Go Walking" and the bouncy "Hard Luck Tom," although "Ms. November" is the best girl group-styled song ever sung by boys. And then there are Daniel Tashian's marvelous guitars, which shimmer, shine, and jangle, a sublime blend of Big Star and Byrds, especially notable on the brilliant pop of "Imaginary Girl." On the rumbling "Catch Yer Own Train," Tashian shifts into western style, while the harmonies and a wailing harmonica pay homage to the British Invasion. The rhythm section of standup bassist John Deaderick and drummer David Gehrke tint the set with an R&B brush, a style that keyboardist Jason Lehning often emphasizes, particularly on the dreamy "Taitville" and the boisterous "The Country Life." However, he's equally at home purveying elegant champagne piano, best heard on the shadowed "She Is Gone" and "Dream of Love," the latter counterpointed by Tashian's laid-back strumming guitar. But even Lehning's most extravagant work is downplayed by his phenomenal production, which beautifully burnishes all the instruments, then artfully places them in a warm and glowing amber setting. This is pop as it never really was, gentle, but glorious, lavish, but never glossy, a set filled with fabulous arrangement and instantly memorable melodies -- variously clap-along, joyous, luxurious, or musing. A stunning achievement. -AMG

I agree with Roy Pearl. Chateau Revenge is a Top 5 of 2010. That being said, Silver Society (posted here) would have been included in my Top 10 of 2007 if I were aware of its existence. Daniel Tashian and The Silver Seas are here to stay.

Thanks for this post.
I, too, would highly recommend their 2010 newie called 'Chateau Revenge'. It will also make it into my Top Ten this year.
Thanks agin.
POPPHIL

Just discovered this band a couple of weeks ago. So good. Starry Gazey Pie is amazing too. Thanks again. Silversuit.

Any chance of a re-up?