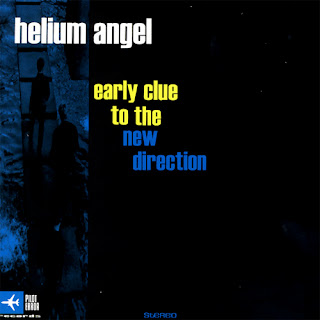 Helium Angel are a young mod band from San Francisco, so correctly mod in fact, that they thank their local Vespa Club and their scooter suppliers in the liner notes. The influences are all right too—The Jam, The Who, The Small Faces. But like the Small Faces before them, Helium Angel clearly dig psychedelia too, though theirs seem to come mainly from the Byrd’s “Eight Miles High” school.
As the album wears on, you realize there’s not a lot of fury here, but then Helium Angel aren’t playing in the shadow of Thatcherism and the Sex Pistols either. There is plenty of self-assured, catchy and crunchy power pop (yes, crunchy can be good), played with the confidence and ability only earned through generous amounts of practice, live playing and, dammit, heart. The punkiest song on the block is “When the Plane Touched Down,” about equal parts Who and Buzzcocks. Here and there, Keith Moon-style drums surface, but then so do Beatlesque harmonies, and a slashing Pete Townshend-ish rhythm guitar. I bet these guys have done a few windmills on their guitars—at least in front of their mirrors. It all adds up to an exciting debut, that while it could use a bit more variety, clearly sets them up for a killer effort next time around. -Pop Matters

Good mod group!!!
If you want, you can find another comment and eight more songs in my blog: http://modforever.blogspot.com/2010/08/searchinghelium-angel-early-clue-to-new.html

Thanks for this version!!!

Wow.. thanks! I know these guys. We were in the same vespa club in SF back in the mid 90's. They always put on a great show. Too bad all them members moved on to other pursuits.

I also loved this band. "Sparkle" was & remains my favorite song of theirs. Went to their final show, at some small club around Mission & 17th (I think), where they handed out a rarities cdr. Bittersweet night. Last time I heard from Blake he was in Baltimore, tho that was years ago.

Awesome album! But it seems to jump straight from track 4 to track 6... is there a numbering problem or is a track missing?

Nope, it's "The Stone is Half Thrown" that's missing.