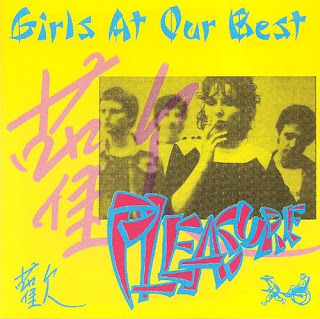 Featuring, oddly enough, a pre-fame Thomas Dolby here and there on keyboards, Girls at Our Best's sole album, Pleasure, is an underrated delight, tempering the sometimes harsh edge of the earliest singles to an equally passionate and entertaining approach not afraid to be calm here and there. With Harper now firmly settled into the drum seat, the quartet touched on everything from Siouxsie and the Banshees' arty edge to Gang of Four aggro-funk and full-on power pop catchiness, and did so brilliantly. Evans' voice was at its considerable best at many points, sometimes so light that it was hard to catch what was being sung, but often able to deliver her sometimes wry, sometimes sunny, but always smart sentiments just right. The hilarious rip on capitalist dreams "Waterbed Babies" and the sly "China Blue" are two particular winners. The sprightly, full-bodied music didn't lack for excitement either, and unlike the rote exercise that much of indie rock later became, there's still an exploratory, honest freshness about the arrangements. Call it the surfy leads Alan throws in here than there, the very intentional disco quotes on "Heaven," or trying out subtle tempo shifts at points for variety within a song, but there's plenty of random joy to be had, down to the guest clarinet on "Fun-City Teenagers." Excellent as it was, Pleasure didn't have the band's defining moment, the absolutely brilliant debut single "Getting Nowhere Fast," which gained posthumous fame via a cover version on the Wedding Present's debut album. Sharp, short, and perfectly catchy down to its sudden edit ending two minutes in, it's one of the highlights of turn of the '80s Brit rock. -AMG

Thanks for the hundreds of posts over the years. I do not always express my thanks though I should so here is an opportunity to do so.
That said, is the uploaded file really the right one? As it is named 'Ten Years After', I do not see the connection with Girls At Our Best's 'Pleasure' record...
POPPHIL

Links have been repaired!

Bought it on vinyl when it came out. Never liked it. A few good songs but most of it still sucks.
Thanks anyway!

Kramer, you crazy bro. "Warm girls" is one of the best songs I've ever heard, dying to find on vinyl!