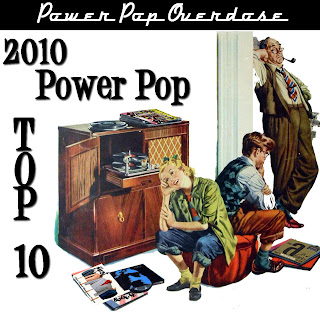 Every year and I am finding it difficult to come up with just 10!! So many talented artists and groups, It is hard to make a decision! I am basing my list on the fact that most of these discs were in heavy rotation at home, work and in my car.
Well, here you are...

10) The Dolly Rocker Movement - Our Days Mind the Tyme - Hammond organ and a fuzzbox infused, These Ausie rockers grab a page right out of the psychedelic 60s. Since exploding onto the world stage in 2002, Our Days Mind the Tyme is thier third release and features 11 original tracks that hits you from the first note to the very last..

9) The Russians - Crashing The Party - From the start Scott Janovitz has given us one brilliant and listenable pop record. Crashing The Party is a gathering of fresh, clever pop songs that finds a balance between 60's influenced sunshine pop and modern inspiration, The Russians will not be disappoint, in fact, it is almost literally flawless and difficult not to listen to repeatedly.

8) The Apples in Stereo - Travellers in Space and Time - Poppy, futuristic and just plain old fun, The Apples in Stereo everything you need in order to have a great music experience.  Elijah Wood and Yep Roc Records have given us a glimpse into the future, and it looks pertty damn cool. The band consists of guitarist/vocalist (and Elephant 6 collective co-founder) Robert Schneider, guitarist John Hill, bassist Eric Allen, and drummer Hilarie Sidney.

7) The Len Price 3 - Pictures -  This UK trio gives us the same fun, early Who/Kinks sound from their previous albums but even more, I can't say enough good things about this release. Pictures is 60's style garage rock and Power Pop melded into an exciting, high energy album that will keep your feet tapping and your head moving long after the first listen!

6) The Parties - Coast Garde - Jangle pop goodness and intelligence exudes from The Parties latest Rainbow Quartz release, Coast Garde.  The songs are infectuous and exquisitely crafted and it’s hard to imagine any Power Pop self respecting fan not loving this nugget. Run out to your nearest record store and get it...Now!

5) Oranjuly - Oranjuly - Brian E. King, the force behind Oranjul (as well as a member of the a fore mentioned Russians) and is proving that Boston Mass is a hotbed for great music.  Oranjuly's catchy and totally pleasing debut is filled with smart, dense arrangements, stellar harmonies and effective lyrics ala Brian Wilson, that accentuate this wonderful album.  Expect to be thoroughly entertained.

4) The Men - Four Good Men and True - Presenting 12 tracks from one of  Stockholm's finest bands! Released on CD in the spring , Four Good Men and True, their third release since 2002, intermingles stylish melodies, tight driving guitars and some well placed fuzz into an appealing blend of Small Faces meet the Who, constructing a most enjoyable album. Another winner from The Men! As if we expected less.

3) Thee Attacks - That's Mister Attack to You -Pure power from the first chord, Danish act, Thee Attacks debut is an electric, hard hitting smack in the face!  Taking Mod to the next step with windmill axe work and enthusiastic lyrics, That's Mister Attack to You can't just played once.  It needs to be played again and again with the volume fully cranked.

2) Edward O'Connell - Our Little Secret - This is what a Power Pop album should sound like!  DC songwriter, Edward O'Connell has given one of the best albums in this genre since the 70's.  Filled with fantastic pop goodies from cover to cover, Our Little Secret deserves to be heard by all. This should be a "must have" for everyone that enjoys bright, clever and well crafted music.

1) Title Tracks -- It Was Easy - Title Tracks, the new project from  DC's John Davis, is definitely a cool band, and their first album was a good one to put them on the map.  This album never lets up, just energetic pop with catchy-as-all-hell choruses.  This band is going to be huge, pick up the album now and be one of those kids that can say “Yeah, I totally knew those guys before they were on MTV… Oh yeah, did I mention I’m cooler than you.”


1.You'd Better Get Back In Line / The Men
2.With This Ring / Edward O'Connell
3.Let's Call It Love / The Parties
4.Man Who Used to Be / The Len Price 3
5.Hello There / Title Tracks
6.I Could Break Your Heart / Oranjuly
7.Dance Floor / The Apples in Stereo
8.Memory Layne / The Dolly Rocker Movement
9.Crashing The Party / The Russians
10.On the Move / Thee Attacks
11.Every Little Bit Hurts / Title Tracks
12.Sold for Sinners / The Dolly Rocker Movement
13.Personal Ads / Oranjuly
14.Catastrophic Storm / The Parties
15.No One in the World / The Apples in Stereo
16.The Girl Who Became a Machine / The Len Price 3
17.Love In Disguise / Thee Attacks
18.The Hardest Job In The World / Edward O'Connell
19.Goodbye Before Too Late / The Men
20.The Record's Over / The Russians
Posted by Curty Ray

Great collection as always, thanks. I always end up discovering some really great music thanks to your year end best of collection.