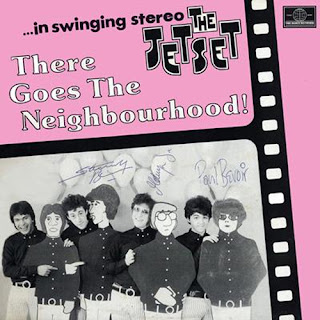 The JetSet were one of the oddest footnotes in British pop music history. Loosely associated with the mod-revival of the late-70s, they took the revival one step further. Not only did they recreate the sounds of '60s pop but they also attempted to mirror the careers and myths of their idols with near-Rutles-esque, attempting a media blitz which included a proposed television series, Christmas greeting flexi-singles, comic strips, trading cards, and an array of fake Jet Set-related products. Though they never really made it out of the underground and have been forgotten by all but mod/pop fetishists, The Jet Set left behind an impressive body of work.

The band was formed in 1979 by teenage friends Paul Bevoir and Melvyn J. Taub. After recording a few demos with Secret Affair's Paul Bultitude, Bevoir and Taub pulled together a makeshift band for promotional photos. When record companies began to show an interest, they enlisted keyboardist Angus Nanan and drummer Paul Bonin as the "real" band for an open slot for Secret Affair. Bultitude signed the band to his own Dance Network label in 1983, releasing their debut, The Best of the Jet Set EP. With the release, they began their marketing attack, creating the Jet Set myth and concept -- the EP included stills from their forthcoming TV show and the "Jet Set Theme." Zany Beatlesque interviews and antics combined with support from Mod underground magazines helped to cultivate a strong cult following for the band. There Goes the Neighborhood, their first full-length album was released in 1985. The album received a great deal of acclaim in the UK and eventually the band attempted to crack the States with Bevoir making a brief promo tour. After 1986's Go Bananas, an album which featured commercials for Jet Set products between songs, Bevoir retired from touring to concentrate on his songwriting and studio craft. In 1987, the band, under Bevoir's direction and growing Beatles obsession, sought to create their own Sgt. Pepper with the lushly orchestrated and painstakingly-produced Vaudeville Park, recreating not only the album's sound but also it's packaging. True to form, they followed with the reactionary back-to-basics recording sessions where Bevoir and Taub found they can no longer work together due to creative differences. The band was dissolved and their final album, Five, was pieced together from the sessions. Bevoir formed Smalltown Parade in 1990 and resumed a solo career in 1994. -AMG