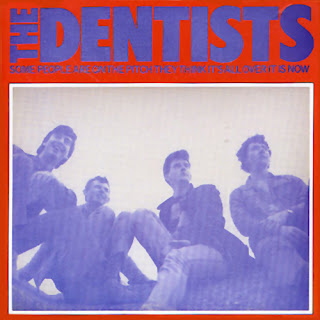 Sounding like they time-traveled in from 1966 or so, picked up a couple of tips from the Smiths, and were let loose in the studio with Joe Meek behind the board, the Dentists' first record, Some People Are on the Pitch They Think It's All Over It Is Now, was released on tiny indie label Spruck in 1985. It is an assured and exciting record informed by the sounds of the '60s garage, folk, and psychedelic scenes (the raw sound and pounding beats, jangling 12- and six-string guitars, whimsical lyrics, and fuzzy edges, respectively), but thoroughly modern too (the Medway-inspired raw guitar sound, the at times fey and melancholic vocal stylings of Michael Murphy, the almost punk attack that the whole record has). The band plays with fire and fervor throughout, Bob Collins' guitar is like a live wire chiming sweetly one minute, drawing blood the next, the rhythm section is tight and tough, the vocal harmonies are spot on, and Murphy balances his moments of introspection with lots of lighthearted and nearly jaunty warbling. All of which would mean nothing without songs, and the group delivers there too. The up-tempo songs ("Flowers Around Me," "I'm Not the Devil," "I Had an Excellent Dream," "Tangerine," "Tony Bastable v John Noakes") sound like the Byrds if they had formed in the wake of the punk explosion of the '70s, hooky and exciting with the rough edges left on and the guitars bubbling and slashing all around. These songs belie the image of being quirky psych-fops that the band somehow ended up being saddled with. The ballads and mid-tempo songs are just as good; tunes like "Kinder Still," "Mary Won't Come out to Play," and "Everything in Our Garden" have haunting melodies and Murphy does melancholy very well, some would say even better than a certain other '80s singer whose last name begins with M. Indeed, place Some People up against the debuts of any '80s guitar pop band and the match would end up knotted at least, the opponents trounced in most cases. Against the best album of any '80s guitar pop band even, because this is the best album the Dentists made. The blend of inspired songcraft performance and sound (and the fact that not too many people heard it) make the record a lost guitar pop classic. -AMG

I have to think that there's no way this can be as good as that write-up, but I have to find out for myself.

StephaniePumphrey said...
This comment has been removed by a blog administrator.
August 21, 2012 at 2:48 AM

For more infornmation to the bend implant dentists services.

Waooow!! Nice blog, this will be greatly helpful. The Encinitas Dentist