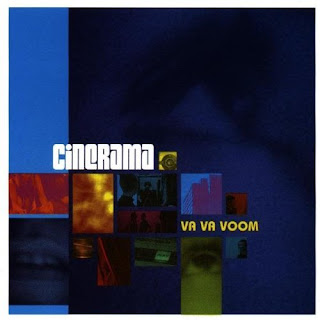 Though the thought is blasphemy in some committed quarters, Va Va Voom is evidence that the Wedding Present should be put to rest, or at least go on extended holidays. Not to belittle 12 years of yeoman LPs and a few dozen ripsnorting singles, but it's clear how refreshed David Gedge is. Perhaps the only limitations were in his own mind as to what constituted a Wedding Present sound or record -- and to be fair, the singer/writer/guitarist has monkeyed with the band's recognizable formula, such as on the more esoteric Seamonsters -- but there have been times when he seemed to be spinning his formidable wheels into too familiar circles, in too narrowly defined and repetitive corners. Imagine instead a playful, joyous, buoyant sound, filled with happy, lush keyboards, freshly sighing strings, neo-flamenco acoustic guitar fills, Sally Murrell's angelic backing vocals/hums, and brighter, more vivacious production -- as well as inspired aid from members of the Delgados, Animals That Swim, and the Church. Gedge's lyrics of sensitive obsession, frustrated, honest, and realistic longings, and kindly regard for his lovers remain intact. Now that they're placed in such a wildly different context, they gain a diametrically opposite power. Further, by turning down the guitars' grate factor, there is much more space for Gedge's likable-guy voice to fill, which means he needn't only feature the harsher, angst-barked tones in his throat. The double-tracked, friendly la-la choruses on "You Turn Me On" or "Dance Girl Dance," on top of surging violins and plinking background xylophone, would have been unthinkable in times past. Yet they seem so natural, you wonder when Gedge realized his own strengths had been so underused! To further antagonize the admirable faithful, Va Va Voom is not only the total shot in the arm the former star has needed, but it's the best album of his career. Maybe the gripping, high-energy power of his more culminating, wrenching Weddoe works such as Bizarro's "What Have I Said Now?" are missed, but the trade for 45 minutes of such focused, crafted, exuberant, yet more lighthearted music is too marvelous to complain. Cinerama is a rare comeback of rightfully restored relevance. -AMG

It took me a while to get into Cinerama and I was never convinced by Va Va Voom but I tnink Torino, along with the Cinerama/The Wedding Present's Take Fountain Gedge's best work.

Did you know you can shorten your long links with Shortest and make dollars from every click on your short urls.