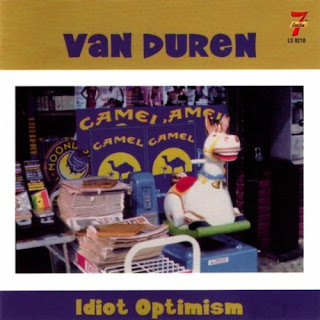 Van Duren was part of the early Memphis power pop scene that spawned the legendary Big Star, and made several underexposed, small-label records during the late '70s. Duren began playing in bands at the age of 13 in 1966 and attended high school with eventual Big Star drummer Jody Stephens; he auditioned to replace Chris Bell in Big Star in 1974, shortly after the completion of Third/Sister Lovers. In 1975, he and Stephens collaborated on some demos that were produced by former Stones manager Andrew Loog Oldham (whom he met through producer Jon Tiven), and a year later he was playing in a group called the Baker Street Regulars with both Bell and Stephens. In 1977, Duren traveled to New England to record for Tiven's new Big Sound label; his solo debut, Are You Serious?, was released in March 1978. The album was released in Europe as Staring at the Ceiling on Big Sound. A second album, Idiot Optimism, was recorded in 1978 and 1979, though disagreements and financial difficulties prevented it from being released (until it was licensed to the Japanese Air Mail label in 1999). Duren returned to Memphis in 1981 and the following year put together a band called Good Question, which gigged around the city off and on for the next 18 years. In 1999, Duren collaborated with fellow Memphis power popster Tommy Hoehn on the album Hailstone Holiday, on which he received co-billing. Unfortunately, health problems forced Duren to severely curtail his activities in 2000, which led to the breakup of Good Question. -AMG

Van Duren has mostly left me unmoved (the album with Tommy Hoehn did as well.)

But this was really, really good!

Maybe it's his earlier stuff that didn't do it for me and a number of years on the road made this album work?

I like all the Van Duren stuff but track 10 seemed a bit damaged. Maybe I need to download again. Thanks a bunch though.

IDIOT OPTIMISM was recorded in 1978-79, directly after the first album, ARE YOU SERIOUS. ID OP sat on the shelf until finally being released in Japan in 1999, and in the U.S. in 2003.
A lot of that All Music Guide stuff is incorrect, btw. I've released two solo albums in the past 5 years, and have been playing live constantly here in Memphis.
Good luck--Van Duren, Memphis, TN