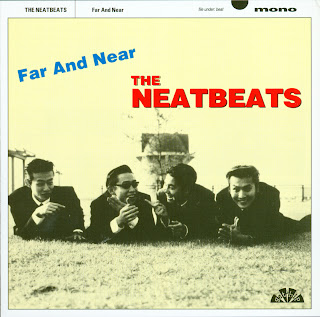 The Neatbeats are Japan's number one beat band, and with this debut opus, it's easy to see why. Quite simply, this is one great little band with a whole lotta heart and some great originals from lead singer/lead guitarist Takashi "Mr. Pan" Manabe. The Neats are dedicated enough to the cause to declare that they plug only vintage Hofner guitars into vintage Selmer amps in order to get the proper 1964 vintage sound; the cheapness of the guitars on this cut-in-mono album certainly would bear that devotion out. But it's ultimately what they do with those retro-approved tools that's of importance in the long run. The riff stomp of "Unhappy Girls" (driven by bassist Dai "Mr. Gully" Ura and drummer Shinya "Mr. Sheen" Kusube) works nicely against the Brit-pop of "Chills," while Mr. Pan and second guitarist Kazuya "Mr. Lawdy" Tosa make a nice big-beat guitar racket on tunes like "She Turned Around" and "What You Gonna Say?" The hit emerging from the pack is the sing-along "I'm With You." Surprisingly, the covers ("She Said Yeah," "Zip-A-Dee-Do-Dah," "Hi-Heel Sneakers," "I'm Gonna Sit Down and Cry") are the least interesting things on here, usually a badge of merit with most retro bands. Although the Neats definitely serve these numbers up in true Searchers/Hollies/early Beatles live at the Star Club fashion, it's their original material (even the three-chord instrumental stomp, "Neatbeat Walk") that truly shines as a much brighter pointer to the future. Fans of their British counterparts, the Kaisers, will love this album, while retro rock &roll fans looking for something new will be in for a big surprise. -AMG

...I once saw a Japanese Beatles cover band called 'Wishing' play at The Cavern and it looked as if they were having the time of their lives.
I love your work PPO...here's mine http://bigplansforeverybody.blogspot.com/
PowerPop, Post Punk and matters arising

Anything Should Happen said...

I watched a Japanes Beatles cover band at the Matthew Street Festival four or five years ago.

I was talking to them beforehand and they were really struggling with their English.

Up they got for their set, absolute word perfect renditions of Early Beatles songs.