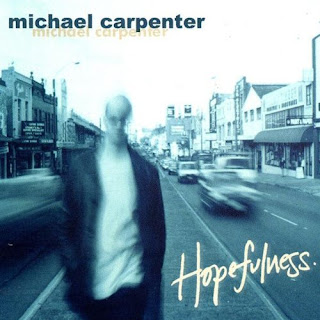 Michael Carpenter's debut album Baby was a stunningly diverse collection of good rock & roll and, most importantly, good production. Carpenter is, first and foremost, a producer; so not only are the songs important, but the execution matters for every bit as much. That's why Baby succeeded, and why ultimately Hopefulness does too. Carpenter's second solo album is a concept album -- of sorts. The set of 12 tracks is lyrically and thematically all tied to Carpenter's recent marriage. On paper, that sounds forced and terribly sappy, of course, but when listening to the actual album, the emotion comes through. Carpenter has had little trouble showing affection for what he loves; his influences are worn on his sleeve, and now he doesn't hide his emotions about his marriage, either. It's hardly typical rock music fodder -- no fast, red sports cars, no "hot girls in love" as Loverboy once sang about -- just one contented, honest songwriter who wants to invite all his fans to his wedding reception, via this CD. Carpenter does get that intimate with the listener, too, and that's why this is such a warm and inviting listen. Those who were intrigued by Baby may find there's a lot to love here: the opening "Kailee Anne" sounds a lot like early Joe Jackson, and the rollicking anthem "Faith" would not have been out of place on the debut. The album is mellower than Baby, too, and this does produce mixed results -- but there is not enough of a reinvention here to possibly scare away anyone impressed with Carpenter's prior work. To round out the album, Carpenter throws in two excellent covers: one of the Beach Boys' rocker "You Need a Mess of Help to Stand Alone" and Sam Cooke's "Wonderful World." -AMG

I was looking for something like this…I found it quiet interesting, hopefully, you will keep posting such blogs….Keep sharing .
slitheriounblocked.net slitherioprivateservers.com Clickerheroes2.co

I think other site proprietors should take this website as an model, very clean and great user friendly style and design, as well as the content. You’re an expert in this topic! PLease visit site picbear to download free anything you like on instagrma.