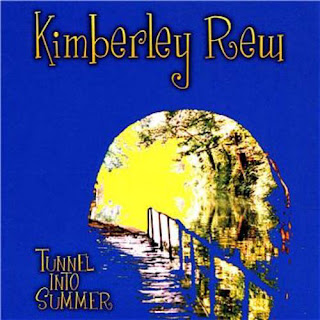 If you had to predict what a Kimberley Rew solo album would sound like (and this one is his formal debut, discounting the 1982 compilation The Bible of Bop), based on his tenure in the Soft Boys and Katrina and the Waves you would figure that it would contain some good songs -- this is the man who wrote "Walking on Sunshine" and "Going Down to Liverpool" -- and have some good, chiming guitar playing. But, since Rew took a back seat to Robyn Hitchcock in the Soft Boys and to Katrina Leskanich in Katrina and the Waves, you might expect that he wouldn't be much of a singer or frontman. The surprise of Tunnel Into Summer, therefore, is that he turns out to be an entirely competent singer, sounding like a somewhat more engaged Hitchcock with his pronounced English accent. He doesn't have the presence as a singer that experience gives you, but he has no trouble carrying a tune, and he sings his own lyrics enthusiastically. Not surprisingly, the other elements in his music are in place: the guitars do dominate the pop/rock arrangements, and they ring out pleasantly; and there are several excellent songs. There may not be any hits in the making like "Walking on Sunshine," but the catchy opening number, "Simple Pleasures," and "Plas yn Rhiw" (a British geography title as unfriendly to American ears as Paul McCartney's "Mull of Kintyre") deserve to join the short list of the songwriter's best efforts. Also not surprising is that, as a solo artist, Rew splits the difference in terms of style between his two major group affiliations. His solo music recalls the work of the Soft Boys and Hitchcock's solo work, and given that ex-Soft Boy Andy Metcalfe produced and played on many of the tracks and that Hitchcock also guested on a few, that's to be expected. But Rew is not interested in the same lyrical conundrums that Hitchcock explores so obsessively. His writing is optimistic, not convoluted, which recalls the more overtly pop songs he contributed to Katrina and the Waves. It may be that the result won't quite please Hitchcock or Katrina fans, but with this release Rew deserves to start gathering some fans of his own. -AMG

Man, I've looked everywhere for this and the link has expired. :-(

I was very impressed by this post, this site has always been pleasant news. Thank you very much for such an interesting post. Keep working, great job!
Ludostar.co Skinscraft.online footballgamesbeast.com