Interview with Tommy Flake - Getting under his second skin

Rich Rossi has kindly allowed PPO to share this interview with Tommy Flake . Presented here is the second half. For the first half head over to the fabulous Orangemen44.com site and get it!


You spent significant time in two cities known for great power pop, Champaign Ill (Cheap Trick, Shoes, Material Issue) and the Minneapolis MN. (Prince, Replacements, Blow Pops). How did these scenes influence you, if at all ?

Well, Cheap Trick was a huge influence as well as Prince and the Replacements. The Elvis Brothers, Last Gentlemen, Farmboys, Hum, Menthol, Didjits, The Bears, Pop The Balloon, and That's Rentertainment (not a band - a store that rented records and had several musicians that recommended bands to me - Jeff Merritt (owner of Parasol Records and That's Rentertainment), Paul Chastain, and Steve Scariano) were all influences from Champaign. BTW, Three of those bands included Adam Schmitt. In MPLS, besides the before mentioned: Bands like The Honeydogs, Vena Cava, Rex Daisy,
The Hang Ups, and Polara. I would say these bands and artists influenced my music as much as all the other great bands I came up listening to.

You've opened for some of music's luminaries including Throwing Muses, Primus, Smashing Pumpkins, and Material Issue. Any favorites? Anyone you care to forget?

Cheap Trick, Primus, The Elvis Brothers, Pop The Balloon, The Tarbabies among others that we opened for early on in my experiences were influential to me as a drummer due to the amazing drummers in those bands (Bun E. Carlos, Herb, Brad Elvis, Rick Menck, Dan Bitney- now in Tortoise).

Lets say you're flying over the Pacific accompanied by the other guys in one of the bands you've toured with. Your plane goes down on an uncharted island. In order to survive you have to eat one of the guys in the band. Which one would you sacrifice and why? 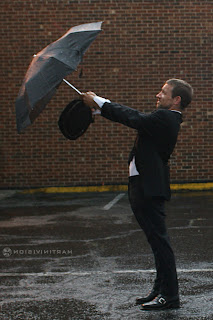 Well, the band was Hot Glue Gun it would have to be Mike Clayton since when I was in the band it was really the two of us with different bass players all the time. Peachfuzz- Ken - he looks tasty. The Beatifics - I would say Chris cause I would need him to stop coming up with harebrained ideas of what we were going to record on the next record instead of ideas to get us off the island. The Elvis Brothers - Graham would be eaten because he would be the best preserved and most likely to annoy me to death. Pinnipeds - I would have to eat my cousin Drew since he's the only other member. Clip the Daisies - I would eat Dan since he was the biggest of us and probably held the most amount of THC. Phyllis - I would have to pick Dave - again for sheer mass. Tommy Flake - I would have to eat myself I guess. (I'm leaving out quite a few bands, but there are too many to list here and I really need to get back to work).

Having toured for several notable bands, I'm betting you have a humorous story or two. Can you share one?

Definitely, my best Rock n Roll story is when I opened for Cheap Trick in the Elvis Brothers. We were in our smallish dressing room and Robin walked in. I was 19 and had grown up listening and loving this band and now Robin Zander was talking to me. He invited us to their dressing room. I take a seat on the couch in there and moments later Bun E. walks in with a brief case, sets it down on the coffee table and opens it up. Inside, the only contents were: a box of kleenex, a cartoon of cigarettes, and about an ounce of weed with pipes in the pen holders. If that weren't enough, when they went out to play in the outdoor amphitheater, he had a window unit air conditioner right behind him on full! I didn't think that my love for him could get any bigger...


You can order Tommy Flake's latest LP as a CDR from Kook Kat Musik HERE or download it at CD Baby HERE.
Posted by Curty Ray