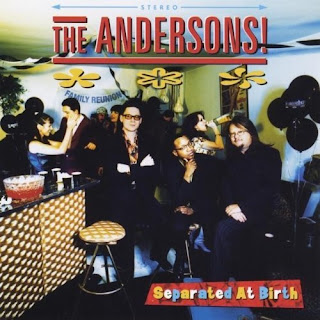 The Andersons are somewhat of a late-'90s power pop supergroup; featuring Derrick Anderson of Chewy Marble and Bob Anderson of Martin Luther Lennon, the band gained a substantial cult following with its colorful 1998 debut Separated at Birth. The gag here is that the three bandmembers, or three "Andersons" -- Bill, Bob, and Derrick -- are all brothers despite looking nothing alike. (Bob is pudgy and long-haired, Bill looks like your basic "indie kid," and Derrick, who is the only black member of the group, is pensive and literate.) The Andersons experienced a slow but steady rise to power pop stardom after the release of this album. Following its 1998 release, positive press and the band members' links to other, more familiar power pop acts led to a large curiosity factor that caused many to seek them out. In 2000, the band was one of the headliners at the annual International Pop Overthrow festival, a collection of dozens of like-minded power pop bands. All of this helped propel sales of Separated at Birth, making it more than just a footnote of power pop. Given how many fans warmed to the band in the few years following the album's release, it's not hard to tell why the Andersons became a power pop favorite. Driven in part by two anthemic numbers early in the running order ("The Truth Is Out" and "Retro Girl"), the album sets its claws in immediately and they are rarely loosened throughout. Derrick Anderson is the group's primary singer, and his throaty yet warm vocal is as distinctive as it is inviting. At first the songs contributed by the other two Andersons seem weaker, but the large picture with this release is that the diversity of its 13 tracks is why they are so engaging. There are some pop culture references sprinkled throughout, from Emma Peel's hair in "Retro Girl" to the iconic love of "(I'm in Love With A) TV Girl" and the chronicle of road rage in the album's closer, the rocking "Big Trucks and Old People." At times, the production does seem a bit muddy and too bottom-heavy, but on repeat listens it only seems to sew the album up more and contribute to the warm familiarity of the disc as a whole. -AMG

This was great. I loved the guitar solos that referenced other songs (Neil Young & The Knack jumped out...)