A Review (sort of) of Tony Cox's On The Way 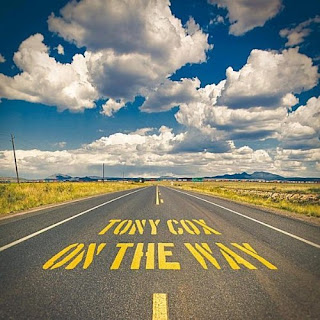 The hole in my schedule allows just enough time. I can either schedule a long weekend at the beach with the family or a root canal. Unfortunately, these experiences can be quite similar.

I haven't been to these parts since the summer of 77, I believe. My only recollection of that trip was a visit to a non descript record store and my purchase, a copy of The Clash's Give Em Enough Rope which I bought with the few bucks I had earned from cutting lawns that spring. I'd read (probably in Trouser Press) about this great new band and so I had to have the LP. That record drastically changed the way I had thought about music at the time.

In that instant I saw the possibilities.

It's a long drive to the coast and while the kids argue incessantly and the wife asks how I could have possibly missed our exit again, The CD player in the car works fine. As Nigel Tufnel would say, it goes to 11. Tony Cox's new CD, On The Way, just arrived in my inbox and I've yet to give it a spin (or whatever it is that CDs do).

And so I popped my new CD into the car player. I give three listens to any new music acquisition before I pass judgment. The first spin piqued my interest, always a good sign. I wasn't sure whether I was listening to a British Invasion style band or an R&B inspired Jellyfish kinda thing, but I liked it. My son had his ipod plugs in so, for all intents and purposes, he was a vegetable. My daughter was twisting her hair and making faces.

I decide to play it again and my daughter groans.

I've always loved R&B influenced artists, so I'm really enjoying several cuts on second listening. We'll Get High and Dropped Me Like a Stone have an irresistible groove to them. While those two stand out, each and every cut has it's merits. Hold Me Angeline is the perfect soundtrack for driving along Ocean Blvd. It occurs to me that this is also a pretty good summertime beach record.

I've got to give this a third spin NOW. My daughter appears to be going through the agony of hip-hop withdrawal and my son is comatose, or so it seems. Good thing I brought the first aid kit. For me, not my daughter.

Cox has damn near channeled John Lennon on the record's fourth track entitled Way. What a great song! How did I miss this last time around? This CD gets better and better with each listen. I played the disc several more times over the weekend and contrary to my daughter's prediction, there were no casualties.

With the vacation winding down, we began packing our things to head back home. As usual, my son was doing nothing, waiting for the rest of us to clean up and pack for him. Oblivious to his surroundings, he was plugged in to his laptop headphones and I was becoming more and more aggravated with him. I approached him with every intention of letting him have it.

My temper is legendary. The closer I got to him, the more my blood began to boil. I was now close
enough to hear what was emanating from his earplugs. As the first syllable left my lips, I realized
what he was listening to. The new Tony Cox CD.

In that instant I saw the possibilities.

Years ago while attending art school Rich spent many hours listening to XTC, The Records, The Heats, Plimsouls and other powerpop bands of that time. Many children's books, greeting cards and website designs later he finds himself (quite by accident) in the employ of a few powerpop artists. I'm not name dropping but they include, John Wicks, Paul Collins and many more.


Life has come full circle. You can find Rich at www.rossibook.com if your so inclined.