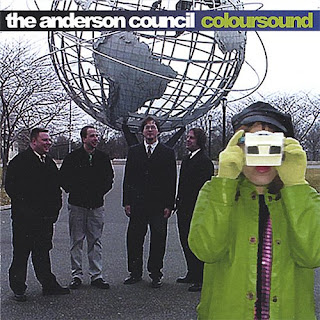 The Anderson Council's debut is likely to give the listener the impression this fashionable young New Jersey band would rather climb into a time machine to transport themselves back to "Swinging London in the '60s" than be forced to record something contemporary sounding. Coloursound, in fact, sounds like a band circumnavigating their way backwards in time, with the dials for their Wayback Machine set for "Carnaby Street, 1967" (even though they've obviously detoured along the way to pick up stray power pop influences). They seem so devoted to re-creating music and obsessed with the process of sounding as vintage as possible, that they've neglected to infuse their music with a personality of its own. Some of this album (produced by Rick Reil and Kurt Reil of the Grip Weeds, another New Jersey band who are big on retro-fit rock) even sounds like it was influenced by the third- or fourth-wave mod revivalists, bands like the Chords, the Lambrettas, and the Purple Hearts. In addition to these influences, there are also Mellotron-powered tunes, like "Mind Meld Mud," which tumble out like re-creations of post-"Strawberry Fields Forever" psychedelia without having any resonance of their own. Repeated listenings to Coloursound reveals it to be an album that wears thin fairly quickly. Even the two faux Coca Cola jingles (one is tacked on to the end of "So In Love With You Girl") that were fun the first time around sound a bit cloying and amateurish during subsequent spinnings. Vocalist/guitarist Peter Horvath's affected English accent also tends to give the band an amateurish feel, as though he's fronting a cover band who were hired to entertain conventioneers in downtown New Brunswick. - AMG

dave down under said...

Contoversy time.....AMG guy does not know what he is talking about repeated listens reveal this album to be a really great set of songs that get in your head, excellent in the wheels on a trip, totally innovative and I recommend this to everyone and when they hear it they all want a copy
'nough said amg fools

Do You have The Fall Parade - their second?