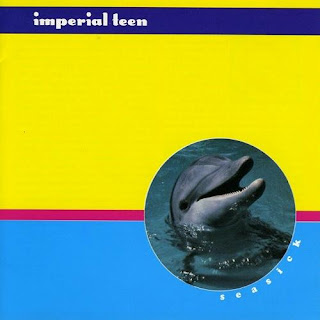 Anyone expecting Faith No More's fractured art weirdness was in the wrong place with Imperial Teen, but those with an ear for attractive, quietly wry pop/rock that didn't give a care for being alternative in the '90s' marketable sense will find Seasick an enjoyable debut. If anything, "Imperial Teen" itself sets the scene at the start with its distinctly Velvet Underground-circa-third-album chug, lyrics softly sung directly into the mic, a bit of feedback fire here and there, and bemusing lyrics discussing everything from gay identity to the band's name itself. Things aren't always so relatively polite, with more immediately aggressive songs cropping up and vocals often taking a stronger turn. However, their spirit and sass is more trashy fun rock with glam/punk roots than, say, Seattle-based fog or incipient nu-metal hash, though there is definitely a Pixies vibe on songs like "Blaming the Baby" and "Balloon," among others. Partially this is due to the constantly traded-off male/female vocals; though Bottum is doing most of the lead singing (though the credits acknowledge all four members doing just about everything), Perko is right there with him. Then there are the moments where the guitars fire up more along with some of the screaming -- one can go on, but it's refreshing to get a sense that the bandmembers learned this directly from Surfer Rosa rather than Nevermind, for instance. Bottum's eye around gender and sexuality defines the lyrics without overtly ruling them (thus a song like "Butch," with lines like "the prince wants to be a queen"). In the end, Seasick is in many ways the lost Breeders album after Last Splash -- brash, sharp-edged, taking no crap, and having good fun while doing so. -AMG

Really good album. Imperial Teen's follow up albums were good too. And a couple of weeks ago they came out with their 5th (?) studio album, Feel the Sound. It's got a lot of the poppy melodies from Seasick but also less of the brashy punk of that album. So, this time out it's less Pixies and more Orange Peels.

I finally got a used copy of that record and understand what the fuss was about. It's great.

Although, full disclosure, I am a huge fan of their third record ON and the new one FEEL THE SOUND.