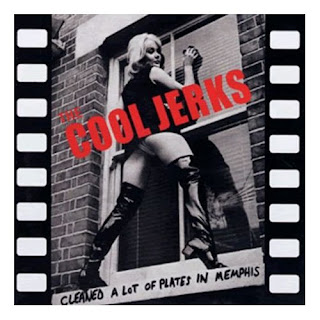 With a lineup that features former members of such seminal noisemakers as the Oblivians and the Neckbones, it should come as little surprise that Cool Jerks flat-out rock. No ham-fisted critical pigeonholing, carefully chosen faux-vintage clothing, or fancy haircuts are needed to dress up what these boys are doing. The album title is itself a bit of a double entendre, serving as a nod to both the John Fogerty classic from which the line is borrowed ("Proud Mary") and to all the time the bandmembers have spent washing dishes and daydreaming about rock & roll. Nothing could more aptly sum up Cool Jerks, as their sound is that of pure, unkempt rock & roll; it's not all glamour -- in fact, sometimes it's downright ugly -- but even when it gets rough, you'll be begging for more. Like other groups cut from the same Memphis-flavored, blues/rock/soul cloth, like the Reigning Sound, Cool Jerks play rock & roll with a sense of urgency that borders on sermonizing. While the Jerks aren't quite as polished as the Sound, they aren't nearly as sleazy as the Oblivians, either. Instead, they are a well-balanced mix of the Oblivians' ferocity and the Neckbones' swagger and jangle. The band plays music that comes straight from rock's roots, the kind of music that comes from being schooled in the masters and possessing a flawless record collection. One of the album's best tracks, "Let It Go and Rock!," was co-authored by Dave Boyer and Forrest Hewes (both formerly of the Neckbones), and the guys trade vocals lines throughout the song, making it perhaps the most shining example of the great things these musicians are capable of when they put their heads together. The Boyer-penned "Man and a Woman" is barebones drums-and-guitar blues-rock, calling to mind the more reserved moment of Jon Spencer, while his "Not the Only Girl in Town" is an ode to not letting the world get you down, sort of the anti-blues. Sometimes known as Jack Oblivian, Jack Yarber's tracks are raw and ambitious, ranging from mid-tempo janglers full of background "oohs and ahhs" ("Friend of a Loner"), to rockabilly flair ("Skip a Beat") and riotous rockers ("Can't Quit"). Cool Jerks' rendition of Smokey Robinson's classic "You Really Got a Hold on Me," though downright polished by Jerks standards, sounds like a 3 a.m. jam session: rough around the edges, but so gut-wrenchingly honest that the flaws only make it more beautiful. Yarber's "Certified Fool" brings the album to its knees with vocals raspier than Scott McCloud's and what sounds like an army of guitars freaking out for the duration of the song. If this were a big-tent revival, Yarber would be the guy rolling around on the ground speaking in tongues. Next, Hewes and Boyer check in again with their dueling vocal attack on "Who You Running To?," which may well be the album's strongest, catchiest track. At least it seems that way until Yarber turns things up a notch with "Why Can't I...?" This great energy between all of the players, each man inspiring the other to play even better, is what makes Cool Jerks a fantastic outfit. Stop mourning the passing of the Oblivians and the Neckbones and start dancing with Cool Jerks. Buy these cats a drink and raise a toast to the gals who broke their hearts and inspired such great songs. -AMG