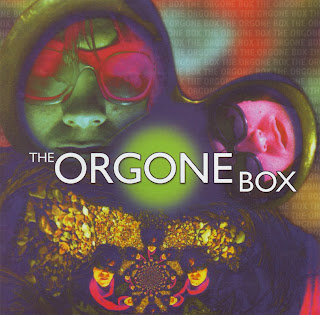 Sheffield based multi instrumentalist and songwriter/producer Rick Corcoran, who plays nearly every instrument here, is the only member of the Orgone Box. He reportedly used four eight-track tape machines, a 32-channel mixing desk, three guitar amps, a half-dozen effects-laden guitars, and laid down guide drums to a click-track during the initial home-recording sessions. Later, during four days of overdubbing at a mansion called "the House in the Woods," Corcoran was aided by a couple of friends, drummer Tam Johnstone (ex-the Green Tambourines, the General Store) and bassist/keyboardist Tim McTighe, who provided "orchestral arrangements" on a Roland MC300. The result, of course, is that the Orgone Box has that identifiable studio sheen that low-budget self-produced solo efforts of this ilk often have, where the drum/bass rhythm tracks are purposefully simplified in the early stages of recording to easily allow for sonic layers to be added above. Even so, unlike most albums that are built this way, brick by brick, from the foundation to the penthouse, the more you listen this CD, the more you realize the Orgone Box is a stylish triumph of substance over simple revisionist psych-pop. Corcoran was evidently inspired by listening to his favorites from the original 1967 era -- the Fabs, Butterfly-era Hollies, early Pink Floyd are a few that come to mind -- and "informed" by later albums released by the Dukes of Stratosphear, Robyn Hitchcock, and Oasis, but he doesn't seem to be too interested in ripping off any of his precursors. On the second track, "Anaesthesia," Corcoran even lets listeners know that he's "not into psychedelia/I've got a psychedelic mind...whatever," probably meaning that his music simply pours out of him whenever he hits "record," without him having to "psychedelicize" to get into the mood. Each track abounds with effective Lennon-esque vocals, ringing Byrds-ian 12-strings, phase-shifting guitar solos, and mellifluous multi-tracked vocal harmonies, all swirling amid confectionery pop melodies. The collective result resembles a fantastic Baroque pop construct of Sgt. Pepper-y proportions, the kind of record that headphones were invented for. -AMG

Right on! I should have guessed you would have this in stock. Teh Orgone Box has been on my all time favorites list for years. All hail the Power Pop Overdose, etc. etc.

Splendid, Curty Ray. Much obliged for making this hard-to-find disc available. Now to put on the headphones...

Corcoran also released an official "bits and pieces" album which is pretty damn fine, and an unreleased but completed second album, a copy of which was given to me on the condition that I don't let anyone else hear it. I'm only mentioning this to get someone interested (maybe Rick himself?) in tracking this down and making it available. He's a great talent and he should be much better known.

I loved this album - and you, sir, are a tease for even mentioning the second unreleased album. I'm sure it's as great if not better than this one.

Would you mean "Things That Happened Then"? I like it but I do play the self titled Orgone Box a lot more often.

The Groovy Fab Forum member who turned me on to it won't mind if I pass it along here - the Forum is, sadly, long long gone.

I will be glad to upload it, and some other tracks not included on either album mentioned here. I will check back in a day or two, in case Curly Ray beats me to it.

I'm not being a tease. There are three full-length Orgone Box albums - 1) the first one posted here, 2) a collection, "Things That Happened Then", including - I think - the tracks he recorded as Orange, and 3) an official, completed second studio album, which as far as I know is untitled, and was never released. I have all this material, but not with me - it's literally on the other side of the world. I will get a track list of the second album in the next day or so and post it here, so we can see what there is. There's no cover, just a scribbled track listing. None of these tracks appeared on the compiliation or the first album - it's the real deal. The unreleased second Orgone Box album.

Here's some moar Orgone, because you can never have too much Orgone energy. (Ask Wilhelm Reich!) Please feel free to adopt, feed, share and promote. Maybe some "buzz" will encourage Our Mr. Corcoran to dust off the tape decks and get busy.

Two archives because Mediafire has a 200 MB limit without an account:

An Anonymous Admirer of PPOD

There's also a 2004 release entitled 'No Reply' which is a re-working of the 'Orgone Box' album with five bonus tracks, 'Beat Generation', 'In The Right Hands', 'Shea', '45 Peartree', and 'No Reply'. The Orange EP tracks are not on 'Things That Happened Then'. The versions of 'Judy Over The Rainbow' and 'Disposable' that are on the Orange EP are different from the ones on 'Orgone Box' and 'Things That Happened Then'.

Found this video of Judy Over The Rainbow (Orange). Like wow man.

Brilliant!! ...Much thnx to all those involved...SixFootSix

This has been one of my favorite records since I first heard it. Thanks for the bonus track version. I'd love to hear the unreleased lp as well.

This is really great. One of the best indie "power pop" records in my view. Lots of different textures.

One of my all time faves - thanks everyone for the fun extras!

My favorite Forum is no moar, and I have not enough to offer that is not already on music blogs. Thanks to all and especially Mine Host for the opportunity to kick something back to "the community."

could anyone please do a reupload of "things that happened then" again perhaps ?

Could someone reupload those 2 mediafire Orgone Box albums & bonus tracks listed above? Sadly neither of those links work anymore. :-( THANKS!!

yes that would be great!!! mediafire is not reliableanymore !!

The tales (above) of a completed and unreleased 2nd album are sadly nosense and 100% untrue. There is NO unreleased album just demos and bits and pieces. I know. I run SUGARBUSH RECORDS, have played live with ORGONE BOX (1 gig in Spain and a few in the UK back around 2003-5) and we are releasing on vinyl for the 1st time the ORGONE BOX (SELF TITLED) album. It will be out in May/June 2013 on SUGARBUSH RECORDS. The trakc listing is revised and there is one new track, also Rick has re-recorded a few of the 4 track numbers with new vocals and backing (Such as Judy). There is also a totally new version of MIRRORBALL. It will ONLY be out on vinyl, so get those record players out. Limited edition of 300. Rick is finishing off the LP right now.

Hi all-the LP is finally upon us-it's called CENTAUR by ORGONE BOX and is available only from SUGARBUSH RECORDS on vinyl (limited to 400 copies) http://www.sugarbushrecords.com/

Curt, is there any chance of a re-upload of the three recordings you shared in 2012? Thanks in advance!

Yes, please upload the three rar files you previously posted in this thread if you still have them and have a few minutes to do so. They'll be much appreciated! I've got the latest Orgone Box vinyl from about a year ago, but I'd really like to have some good quality digital files of these songs, too.