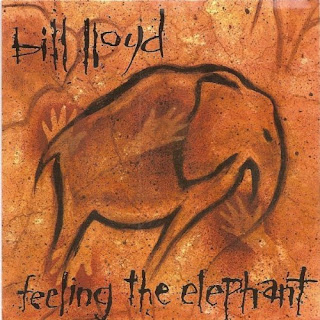 Bill Lloyd's first solo album was actually released in 1987, predating the Nashville native's association with Radney Foster in the mainstream country act Foster and Lloyd. However, at that time, it appeared on the tiny Boston indie Throbbing Lobster, just as that label was breathing its last. Thoughtfully, Atlanta's DB Records picked up Feeling the Elephant after Foster and Lloyd's commercial breakthrough and reissued it in a new cover with slightly improved sound. Good thing, too, because Feeling the Elephant beats the pants off of Foster and Lloyd's fine but annoyingly slick albums. Recorded as (mostly) one-man band demos between 1983 and 1986, the ten songs on Feeling the Elephant range from Big Star wistful jangle ("This Very Second") to Marshall Crenshaw roots pop ("Lisa Anne"), with side trips into the funky rock of "I Wanna Sit and Watch the Credits Roll" and the ghostly psychedelia of "Everything's Closing Down." It's hard to believe that this wasn't originally recorded as an album, because there's a flow and organic unity to these well-sequenced songs that makes Feeling the Elephant a more satisfying listen than most power pop albums. The slightly new wavish, Let's Active-like title track and the ultra-catchy jangle popper "Nothing Comes Close" are particular highlights, but this is a power pop joy from start to finish. -AMG

Anything Should Happen said...

Second that. I am a big BL fan and couldn't agree more about F&L. I also like Radney Foster's solo stuff, but together they somehow. . . are less than the sum of their parts.

Any change you have the Confidence is High EP just laying around?

This is another great one. Actually everything he's done is top notch. Good call. Thanks.

Allow me to be the voice in the wilderness here! Foster and Lloyd were one of my favorite country acts of the '80s, who helped to bring back the traditional sound of country music. Yes, maybe it was "slick" and produced, but Bill & Radney had wonderful harmonies and very catchy, infectious songs. Their music is waaaaaay more country than what passes for it these days! And they parted much too soon!

In all fairness, I have never heard this CD, although I've seen it around for years, so I'll have to give it a listen. Thank you for putting it out there for us all to enjoy!

Okey, I heard to "Standing on the Shoulders of Giants" and i think it's very nice, with many good songs. So... Can i ask you for one more re-up?

I can thank you enough Ray. I'll listen to this and then i tell you what i think. But, for what i heard on the twenty-seconds preview of allmusicguide, it sounds like elvis costello (seventies period) or something similar.