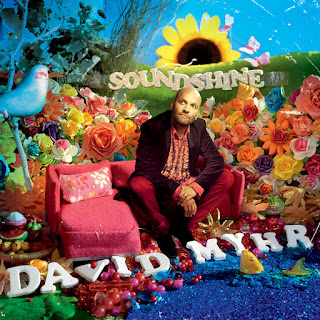 ACCEPTING PRE-ORDERS NOW FOR AUTOGRAPHED COPIES!! WOW!!! David Myhr took his first steps into the music business with power pop legends The Merrymakers. After too many years of silence it was time to make his debut as a solo artist. The songs on "Soundshine" are representative of everything he stands for: melodic, well crafted pop music with a heart. If a thread of timelessness runs through The Beatles, Wings, Crowded House, Jellyfish, Fountains of Wayne, and The Feeling, his music appears at several places along that thread – sometimes even simultaneously. It’s also easy to hear that his music has sprung from the same Northern indie pop soil as bands like Popsicle and The Wannadies. The record is chock-full of fantastic pop songs presenting one masterful melody after the other along the way, delivered with tasty guitars, lovely hooks, gorgeous harmony vocals, and pop lyrics that actually say something. David stands for talented and intelligent and melodic pop music at its purest. This album is centered around the songs – and what songs! ”I love that tingling down the spine when I hear a great song – when superior craftmanship meets the magic. I constantly strive for that that with my own songs”, says David. He writes because he wants to, and because he has to. His goal is to make others feel the way he does when he’s moved by a great song. ”If making music leads to interesting things happening and meeting great people, that’s enough for me. The fact that the record industry has been proclaimed dead is liberating in a way, because everyone is free to make music that they genuinely like!” Although the name of the album is "Soundshine", it could just as well have been titled "For The Love Of Melody". We'll go out on a limb and proclaim that this very well will be a Top 5 (if not #1) contender for 2012's year-end "Best Of" lists!

great release! i shelled out for the Japanese issue a month or so and it's all nifty stuff! jim

@Anonymous - any chance you could post the japanese bonus track "Record Collection"? I see it will not be part of the US/UK release. Thanks.