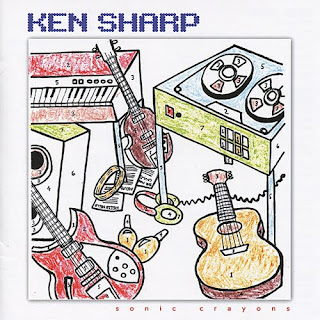 Anybody who recognizes Ken Sharp's name from his work as a rock critic and music journalist already knows that he has exquisite taste. Not only has he written (or co-written) books on the Beatles, the Raspberries, and Cheap Trick, he's done liner notes for Partridge Family, Hall & Oates, and Rick Springfield reissues, demonstrating that he has a keen ear for all kinds of pop. His love of pure pop is evident in his writings, but a better place to experience it is in his own music, where he fuses all these disparate pop influences into his own sound. His first two albums, 1995's 1301 Highland Avenue and 2000's Happy Accidents, were bright collections of pure pop, but 2007's Sonic Crayons is a genuine leap forward, both in composition and conception. First of all, the title has quite a bit of relevance to the album itself since this is a colorful album, but it doesn't overemphasize its sonic hues: the sound isn't crisp, it's warm and gentle, not dissimilar to the comforting coloring of crayons. It's a sound that is an appropriate marriage for Sharp's new songs, which bear as much Beach Boys influence as Beatles here. But where many latter-day pop albums influenced by the Beach Boys spend far too much time in labored arrangements, Sharp taps into Brian Wilson's sighing melodies and enveloping elegance of the group's softer moments. He also doesn't linger too much on Wilson, either: the Beach Boys are just one of several soft pop allusions here, allusions that are highlighted by the tremendous "Why Girls Cry," a trembling ballad worthy of early Todd Rundgren. "Why Girls Cry" also ties into the album's cohesion, as its broken heart can also be heard elsewhere on Sonic Crayons, as Sharp turns inward and infuses this album with a serious emotional undercurrent. But far from being a gloomy album, Sonic Crayons is warm and welcoming -- any lingering melancholy is comforting, not alienating -- which makes it a record that's easy to return to for repeat plays. Of course, it also helps that Sharp evidences the same kind of care in the album's sequencing as he does in the individual songs: this album is not only tighter than his previous two, it also flows better, gliding from song to song with grace. This careful construction, combined with his ace songs, makes Sonic Crayons Ken Sharp's best album to date. -AMG

If you want to buy this CD, please email Ken at sharpk@aol.com

Thanks! Very very beautiful album! It`s the beatlesque style indeed! but with the little contemporary elements. Please, give me some recommendation about other bands or singers who attempt to sing like The Beatles. Power Pop i find great genre!