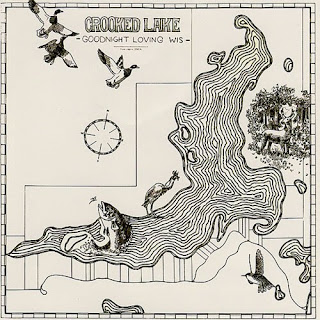 There may be no better American rock band to have emerged in the late 2000s than Milwaukee's the Goodnight Loving. And most certainly very few who, by the anti-will of their own humility and small-town D.I.Y. roots, managed to sneak through the indie-zeitgeist's gaze with such woeful underappreciation. But alas, they are merely carrying the torch first unceremoniously lit by fellow Midwesterners like '68 Comeback and the Oblivians, whose frontman, Greg Cartwright, unsurprisingly produced their 2006 debut, Cemetary Trails. But where that effort was a remarkable, if unsophisticated, launching pad for kids in their early twenties fucking around with a carnival of rustic influences and a diplomatic songwriting approach, Crooked Lake is a focused journey through traditional Americana, religiously sloppy garage rock, and the most ramshackle of punk rock brattiness. "Land of 1000 Bars," a particularly rollicking, harmonica-hoisted two-minute frenzy, is anchored by their trademark knack for sharply worded sentiments that ideally capture inglorious nostalgia, like the first verse's lament that, "I've traveled near and far, but I still can't shake the shadows of 1,000 bars." But just as suddenly they can unleash a contemporarily jaded folk song like "21st Century Post-Apocalyptic Worried Rant," which juxtaposes the insistent strumming of a lo-fi acoustic against knowingly lethargic vocals, while the faintest of keyboard notes serve as a sarcastic pulse to keep the song on measure. And when the bluegrass twang of "Whiskey Nights'" gives way to rolling, half-time snares and harmonized choral vocals, a moment of pure musical joy coincides with the realization that Crooked Lake is a crucial work by a group of guys with an endearing, and necessary, lack of self-consciousness. And that with any revisionist luck, it will eventually be included in the canon of that decade's essential rock LPs. -AMG

Wow, I had never heard of these guys. It's got acoustic guitars and harmonies in a completely unpretentious rockin way.

Greetings Curty Ray and readers!
I dropped by just to let you know that this awesome column has made my day.
in fact, coming here has been a marvelous experience.
Learn something new every day.
Anyway, I have always thought that Goodnight Loving is a great affair!