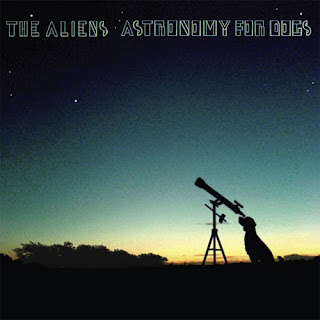 Astronomy for Dogs -- great title that, conjuring up some pretty evocative images, but The Sixties 101 would be a more accurate moniker for this album, the first from a trio of ex-Beta Band members' new outfit, the Aliens. Across the disc, the group offers up a primer in virtually everything that made that decade so musically memorable, all wrapped around 11 glittering pop songs. "Setting Sun" sets the stage, a storming garage rocker boasting electric Kool-Aid organ, psychedelic strawberry swirls of guitar, an instantly singalong chorus, and an exhilarating melody guaranteed to bring acid flashbacks for days to come. "The Happy Song," aptly enough, is just as upbeat, but in an R&B mode, its repeated refrain of "you want to be happy" bolstered by barreling keyboards, a fiery guitar riff, a storming rhythm, sun-drenched harmonies, and an exuberant atmosphere that leaves glee in its wake. In contrast, there's the downbeat "Caravan," a blues number that travels into psychedelia, revisits the Canterbury Scene, then rockets into space rock, before settling into a mesmerizing, surprisingly structured prog rock jam. Sheer brilliance this, and without even a hint of the self-indulgence that so defined the late '60s/early '70s. And that's the real beauty of this set, for all its proggy, psych-out elements, every note and each effect within are there for good reason, even at its most seemingly jammy, free-form improvisational. And although there are more extravagant acid-drenched pop excursions to be found within, like the magnificent "I Am the Unknown," the Aliens study other forms as well. "Robot Man," for example, is a musical essay on funk, the luminescent ballad "She Don't Love Me No More" a dissertation of classical elements within rock and folk. The baggy-styled "Rox" is blues-based but wanders far afield into Eastern climes and techno clubs, turning back the calendar even into the new romantic realm. "Only Waiting" and "Tomorrow" look back in fondness to the Beatles, while "Glover" conjures up the Kinks' "Sunny Afternoon," and crosses more than just the Mersey in the arrangement. But beyond all the inspired arrangements, exceedingly clever echoes of the past, flawless musicianship, and expert self-production, what lingers are the band's magnificent melodies, be they lavish ballads or revved-up rockers, classic pop from the past for today. Alien they may be, but you'll be begging them to transport you away. -AMG