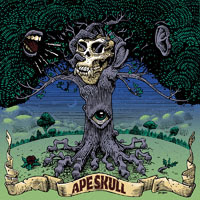 Let’s forget stoner…. It’s so 1990s! C’mon let’s get over that rather contemporary metallic retread of classic Sabs riffs by guys in baggy shorts with shaved heads! There’s no need to reinvent the source material when it’s so good.

Rolling back four or so years before Brit rock and its US cousins had slowed riffs down to a doomy level Eric, Jack and Ginger, Peter Green and one Jimi Hendrix had taken the mantle and done something of their own with their beloved blues. That spirit spread around the world and inspired bands like Blue Cheer, The Damnation Of Adam Blessing, Jerusalem, Dust and a whole host of long haired lads and lasses that combined acid-rock with blues, country-rock, soul and funky grooves to create the heavy and hard-rock scenes. Its influence has never passed, but it’s often mutated in unpleasant ways that must sicken the forefathers. Italy’s Ape Skull certainly won’t be offending anybody who can remember sitting cross-legged at hashish infused open-air festivals across the late ’60s.

Just as the old bands came to rock from humble beginning (starting in beat, blues and garage bands) Ape Skull’s roots lie in the late ’90s psychedelic and freakbeat scene – Giulianio Padroni (drums) and Fulvio Cartacci (guitar) played in the superb The Victorians, who graced the stages of mod and ’60s events all across Europe. Unlike many new bands who have come from metal and turned the clocks back to ’73 Ape Skull have worked forward; a far more apt path to follow. The same root that led to Cream and Led Zep!

In covering the heavy psych groove of the dancefloor classic ‘I’ve Got No Time’ (by little known German act Orange Peel) Ape Skull tie their colours to the mast, knowing that in certain circles this will mean something. ‘Time In Wind’ sees them in a more American mode recalling the softer moments of Blue Cheer, Kak or even British soulful rockers Free. Across the entire album they shift tempo and motifs, never stuck on that one same gloomy chord progression!

The “Classic Rock” brigade will go ape for this band, but then so will Black Keys followers, ’60s psych fans and everybody in between. It really is that good.

Listen up and make sure you get wind of Ape Skull. It’s certainly the best rock album you’ll hear this year.

'So Deep' from the album "Apeskull"